John Jerrim, from University College London (UCL), said the findings provided an “important counter to conventional narratives” that the tests could have a “serious negative impact upon children’s wellbeing”.

However, critics have questioned the findings, which are based on data from 2012. There have been major changes in curriculum and tests since then.

Jerrim, the report’s author, said more research was needed to “better understand both the positive and negative effects these tests have on young people, especially in light of the challenges teachers and pupils have faced throughout the pandemic”.

But he concluded there “does not seem to be strong enough evidence to support key stage 2 tests to be scrapped on wellbeing grounds”.

The peer-reviewed study analysed data from about 2,500 year 6 children in England, where tests are carried out, and other UK countries that do not run tests.

A release of the report’s findings said there was “little difference” in the wellbeing and happiness levels reported by children, regardless of whether they took tests or not.

Among those that did SATs, there was “no significant change” in how they felt about themselves, their school or family life in the weeks around tests.

Nearly 25 per cent of children in England said they felt unhappy about their schoolwork before the tests compared with 28 per cent for children in the rest of the UK. This figure did not significantly increase or decrease in the weeks before and after testing.

The findings, which can be read in full here, challenge the views of school staff. A 2019 UCL study, conducted for More than a Score, which campaigns to scrap SATs, found four in five headteachers thought the tests had a negative effect on pupils’ wellbeing.

The union’s report included examples of children having nightmares and making themselves ill so they did not have to attend school.

Kevin Courtney, the joint general secretary of the NEU, dismissed the new study, which is based on 2012 data from the Millennium Cohort Study (MCS).

“Unfortunately, the researchers have drawn conclusions about the future of primary testing based on analysis of the regime almost ten years ago.”

A “radically changed” curriculum meant it would be “much more helpful to study the impact of more recent testing”.

A press release accompanying the report said reforms since 2012, while “unlikely to undermine key findings”, could affect pupil wellbeing “if the importance attached to these tests has increased”.

Responding to Courtney’s comments, Jerrim said the mental health debate was a “fairly long-running argument”, adding: “Show us the money – let’s get some high-quality unbiased evidence that’s not funded by an interest group and let’s see what the data says.”

He said the tests played a “fundamental role feeding into school accountability metrics and our findings suggest they should continue in their current form for the foreseeable future”.

Markers paid as little as 4p for each batch of questions 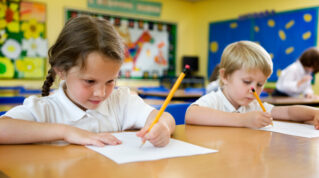