Government plans for all schools to be in multi-academy trusts could help stop STEM teachers leaving for higher-paid private sector roles, the schools minister has claimed.

Robin Walker told the Parliamentary science and technology committee this morning that the white paper reforms could offer “greater career progression” for teachers in families of schools.

Physics teacher recruitment was the lowest on record this year, with just 22 per cent of the necessary teachers entering initial teacher training.

Targets were also missed in computing (69 per cent) and maths (95 per cent). However, targets were exceeded in biology and chemistry.

The committee is investigating diversity and inclusion in the science, technology, engineering and maths (STEM) industries.

During the hearing, former shadow education secretary Rebecca Long-Bailey asked Walker what steps government was taking to “try and dissuade teachers from going into the private sector where they are offered far more in terms of salary”.

He said while the government should not be in “the business of necessarily disincentivising people to look at what their options are”, it should make sure “the state education sector…is competitive and effective”.

Walker said the department’s focus on teacher retention, investments in professional development and the levelling up premium were aimed at making sure “we do have a really competitive sector”.

“I also think the school system reforms we set out in the white paper will be helpful in that respect because I think they offer greater career progression to many teachers when they are working in families of schools. So I think there are real opportunities in that space.”

Walker also pointed to the government’s pilot to get more engineers to train to become physics teachers, due to launch in September.

However, as Schools Week reported, bursaries in chemistry, computing, mathematics and physics will remain at £24,000 in 2022-23, the same reduced level as this year, despite fears the uptick in teacher recruitment as a result of the Covid pandemic will not be maintained.

At A-level, exam entries rose by 4 per cent in biology and chemistry and by 5 per cent for physics this year. But this compares to a 16 per cent hike in geography and 14 per cent rise in law.

Asked whether it should be mandatory for students to take certain STEM A-levels, Walker said said the opportunity to “pick options at 16 is valuable and valued by students”. 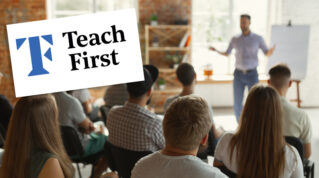