Ofqual’s second in command during the 2020 grading fiasco has left after seven years at the watchdog.

Julie Swan has now been appointed as deputy chief regulator alongside her role as executive director for general qualifications. She’s been with Ofqual since it was set up in 2008.

New chief regulator Dr Jo Saxton said Swan’s “excellent leadership skills and valuable contribution” to Ofqual’s work for more than a decade made her “the ideal person to step into this important role”.

She added: “I would like to take the opportunity to thank Dr Michelle Meadows. We are extremely grateful for the enormous contribution her work has made at Ofqual during the past seven years, and we wish her every success in her new appointment, which had been planned for some time.”

Swan said looks forward to supporting new chief regulator Dr Jo Saxton “as we transition out of the extraordinary arrangements in place during the pandemic”.

Cath Jadhav, director of standards and comparability, has taken over Meadow’s executive director role on an interim basis.

Sean Pearce remains as chief operating officer as does Catherine Large as executive director of vocational and technical qualifications.

Meadows joined Ofqual in 2014 and was appointed as deputy chief regulator in 2016. She was grilled by MPs last year after the government’s U-turn on awarding grades moderated by an algorithm in 2020. Students were instead given centre assessed grades.

She said the grading model was tested “thoroughly” and said she didn’t believe that the algorithm “ever mutated”. It followed prime minister Boris Johnson blaming a “mutant algorithm” for the fiasco.

More recently, Meadows said that “flexibility of thinking [was] required” to make a move to online exams in the future, as has been mooted for several years. She was previously a research director at exam board AQA. 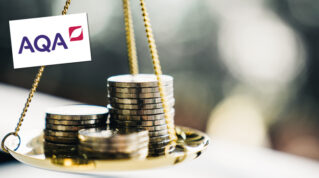