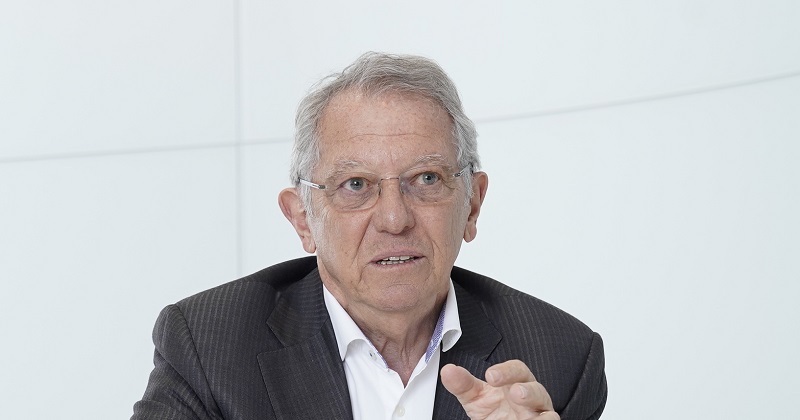 The “Independent Sage” group had already published an interim report last week stating the government’s proposed date for schools to reopen of June 1 was “too early”.

The report has been published ahead of the government confirming later today whether or not schools will reopen next week.

Here’s a speed read of the findings.

The report warns the most recent estimates for the UK are that R [value of transmissions] is between 0.7-1.

They say this means all the back-to-school scenarios modelled by SAGE are at risk of pushing R about 1. As the model chosen by the government was not one of those scenarios, it means the “potential impact of reopening is even more uncertain”.

The report states that public adherence to social distancing is “influenced by trust in the government
and its messaging”, but says trust is “increasingly strained”. It adds going ahead with reopening on June 1 is therefore “risking a new surge in cases” in some communities.

2. … but localised test and trace system is the solution

The group believes that school openings should instead be guided by “evidence that there are low levels of COVID-19 infections in the local community” where the school is situated. This must go alongside the “ability to rapidly respond to new infections” through a “well-functioning, coordinated, local test, track, trace and isolate strategy”.

The government has today launched a national track and trace system, but there are already reports of problems. Prime minister Boris Johnson also said yesterday that they will have to “steadily” work towards the system being “world class”.

Professor Anthony Costello, speaking at the report’s launch today, said he believes a local system, as required by the independent sage group, is a “couple of weeks” away.

The report states: “We have seen no compelling evidence that these conditions have so far been met across the country. Until they are, it is not safe to open schools everywhere on June 1.”

However, under such a system, scientists say a school closing temporarily because of coronavirus after reopening should not be seen as a failure – or that opening was premature. Instead it shows a community-based test and track system will play an “essential role” in delaying or preventing a second wave.

The report stated where there are ongoing new infections within a community, evidence suggests that reopening schools could increase the spread of the virus “perhaps by up to 0.3 on the R value”.

But this isn’t clear cut – they do point to other evidence from Asia suggesting school closures have “little impact” on the rate of transmission.

Modelling by the group, based on the most recent national-level data available, shows delaying school reopening by two weeks, to June 15, approximately halves the risk that a child will be infected (see table below).

The report added: “This means that if a school is not ready to reopen safely, delaying reopening by a couple of weeks would allow time to find solutions to local challenges and set up strong local testing procedures while knowing that risks of infections are getting lower.”

Many councils have already decided it’s unsafe for their schools to reopen. Prime minister Boris Johnson has conceded it may not be possible for all schools to reopen on June 1. He said the government will “support and work with the sector” to ensure any schools experienced difficulties are able to open more widely “as soon as possible”.

The report adds: “Independent SAGE believes that decisions to reopen schools must be made on a case by case basis and in partnership with local communities.” 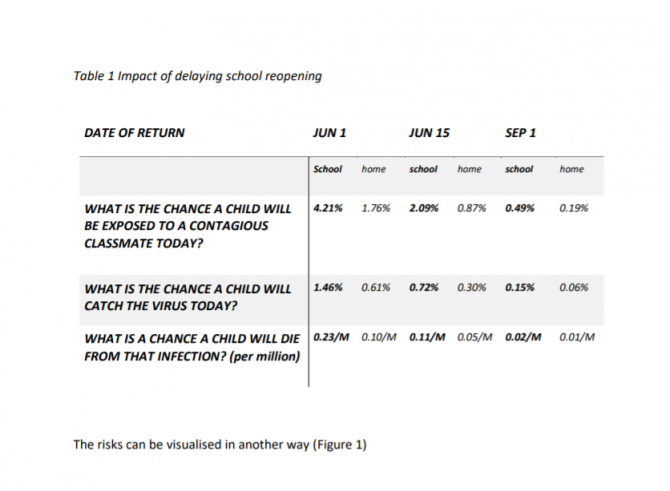 Ministers have justified their reopening plans by highlighting how other countries, such as Denmark, have reopened their schools.

However the report highlights class sizes in England are “substantially higher” than other European countries. The average class size in English primary schools is 27.9, compared to 20.1 across all European primaries.

“It is therefore easier for Danish or German schools to reduce class size to around 10 pupils (halving a class) than England (splitting a class into thirds).”

The report also points out how our system of academies – independent of local authorities – is different from most European countries, where “local or regional authorities are making the final decisions on whether each school is ready or not”.

The group highlights how many schools built under private finance initiatives (PFI) do not have control of building management, including cleaning and the availability of facilities out-of-school-hours.

This means that the oversight of measures to reduce risk – such as extra cleaning – will be “difficult” and require “extensive and expensive renegotiations to contracts”. The group says the treasury should “take financial responsibility for this”.

However Schools Week revealed last year how schools had been snubbed from accessing a new PFI “centre of excellence” run by the government to help public bodies get a better deal from the contracts.

Councils and civil society groups should “be mobilised” to use sports stadiums to run summer school catch-up camps, the scientists have suggested. They claim around 750,000 volunteers could be made use of, and say if teachers aren’t available then to make use of trained coaches and approved supervisors.

This would be targeted at the most disadvantaged pupils, but would also provide respite for parents and carers.