Inclusive Britain: a chance to right our history curriculum

Diversifying literature? Talk to your librarian

Every summer, Schools Week publishes a count of how many women vs men – and how many BAME contributors – have been represented in the publication’s expert articles, front pages and profile interviews over the school year. Here Cath Murray considers why representation is important, explains how Schools Week has worked to improve it, and presents this year’s stats

One of the best things I’ve heard said in the ‘minority-group representation in the workplace’ debate in recent months is that it shouldn’t be about choosing someone because they tick a box – be it sexual orientation, gender, ethnicity or disability – but about choosing the right person for the job, then making sure that personal characteristics do not prevent them from being offered it.

I think there are a few caveats here, including the need to throw the net wide enough in the first place, and remove unconscious bias from the initial selection stages. There’s also the tricky question of how to ensure that the final decision is truly bias-free. One suggestion I’ve heard is that, rather than placing diversity quotas on shortlists, quotas are set for the selection panels.

This isn’t a question of lack of talent

However we achieve it, minority-group representation is important for many reasons – not least in building young people’s self-esteem and offering them role models. As I sat writing this column, the Centre for Literacy in Primary Education published a report stating that only 4 per cent of the children’s books published in 2017 featured any black or minority ethnic characters, even though 32 per cent of school-age children in England were BAME.

It seems obvious that a conscious effort by publishers – even employing some of the suggestions above – could help shift this balance. There are enough BAME authors out there, so this isn’t a question of lack of talent.

There’s a similar factor at play in representation in the media. It would be weird if we were to interview people just because they are BAME, or female, or disabled, or from Newcastle. So in a sense, we need the world of schools to be sufficiently diverse before we can even start to represent minority groups in our pages. But it is diverse. There’s a 2:1 ratio of women to men among headteachers (although men are overly represented in leadership, particularly in secondary schools, measured against their presence in the teaching workforce). Eight per cent of the teaching workforce is BAME.

We surely have a responsibility to cast the net wide

Given this, we surely have a responsibility to cast the net wide enough to ensure that sufficient people from minority groups get on our radar, if we want to be able to identify the really interesting or innovative ones.

Jon Yates, Damian Hinds’ special adviser on policy – who has spent his career trying to get people to cross cultural divides – can speak eloquently (and quote research) about the “bubbles” in which we all live. Schools Week journalists are predominantly white British, and it would be naïve to assume our professional networks will naturally include a representative proportion of traditionally underrepresented groups, without our making a conscious effort.

Networks have been key to spreading the word that Schools Week cares about representation. We’ve spent the past few years attending events run by networks such as WomenEd, BAMEed and LGBTed – not to advance any kind of edu-domination agenda these groups might hold, but precisely to make sure we are moving in circles other than those we might naturally move in.

To keep ourselves on our toes, we’re publishing our key stats, as we do every summer: 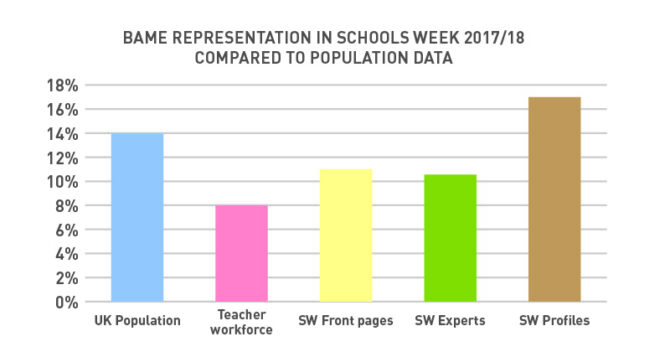 Having made a big effort with gender balance in 2016-17, and then ethnicity in 2017-18, we will put a special focus on geographical representation next year. So if you’re doing interesting things in schools, especially outside the south east of England, this is your year to shine: get in touch with cath@schoolsweek.co.uk!

Campaigners have offered a 'cautious welcome', but note there is room for huge improvement