School leaders’ unions ASCL and the NAHT previously said they were “appalled” after Zahawi wrote to leaders on bank holiday Monday to tell them school-level tutoring data will be made public in the autumn, as well as being shared with Ofsted.

They said this was a “direct contravention” of the Department for Education’s own staff wellbeing charter.

Responding to the concerns, Zahawi said he wants to reiterate “the apology I made in person in our meeting for the timing of the letter and the impact that had on some headteachers and others in the profession”.

“I recognise that sending the letter following schools’ return after the Bank Holiday weekend would have been a better approach.”

Unions also accused Zahawi of breaking his department’s own pledge that new policies on accountability should be brought in, wherever possible, at the beginning of the school year.

But Zahawi believes the publication “does not represent the introduction of a new accountability measure for schools”.

He said: “When I was vaccines minister I learned about the power of transparency in the delivery of public services.

“As education secretary I am committed to this same level of transparency, and believe that publishing data and evidence is a critical part of delivering my priorities. It is in this context that I have committed to publishing school-level NTP data.”

He also said Ofsted has confirmed inspectors “will not consider NTP data in isolation” and the data “will not determine schools’ inspection grades”.

“As you and your members are already aware, however, Ofsted will consider how
schools make use of tutoring as part of their evaluation of the quality of education
and leadership and management.

“It is therefore right that they are aware of all relevant sources of data, especially when this relates to provision for disadvantaged pupils.”

Unions welcomed the apology for the bank holiday release. But Geoff Barton, ASCL general secretary, said he was “disappointed” Zahawi “intends to press ahead” with publishing the data.

He added: “He says it is not a new accountability measure but we remain concerned that it will end up being a de facto league table, and we are disturbed that it is obviously going to be a source of information for Ofsted inspections.

“None of this was said when schools were first informed about this year’s NTP and there are a number of factors which will affect take-up – the disruption caused by Covid and the cost of topping up the partial NTP subsidy from school budgets which are under great strain, for example.

“We’re all for transparency but we’re also in favour of timely disclosure and consultation – neither of which has happened.” 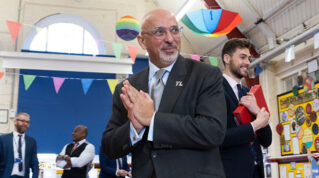