Recent national and international evidence has shown that the Covid-19 pandemic has increased the negative impact of disadvantage on educational success. Understanding how to mitigate this is therefore vital to ensuring an equitable recovery for disadvantaged young people.

New NFER research highlights the importance for these students of understanding how you learn and of creating environments where pupils believe their ability will develop over time, rather than something that is fixed.

These findings come from further analysis we undertook of pupils who took part in OECD’s Programme of International Student Assessment (PISA) in 2018. Although the data was collected prior to the pandemic, the analysis provides insights into how we can support pupils as they return to school having missed a significant amount of learning. 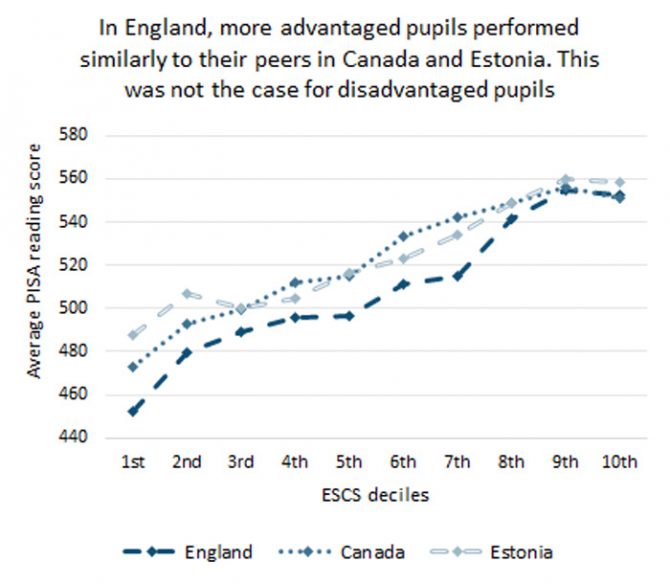 In spite of their socio-economic disadvantage, some pupils overcome barriers and attain high scores in PISA. In England, Wales and Northern Ireland, around one-third of disadvantaged pupils achieved at a level considered by PISA to equip them for success in later life.

Digging deeper into the PISA data can help us to identify areas for support. NFER’s analysis found that disadvantaged pupils who did well in PISA despite the odds had a better understanding of how they learn – or ‘metacognitive strategies’. They were also less likely to believe that intelligence can’t be changed – to have a ‘growth mindset’. In addition, they had high aspirations for their future education or careers and were less likely to truant.

As the EEF advises, metacognitive strategies can be taught in conjunction with subject specific content that will help to cement them as transferable skills. Our new findings make a strong case that they should be. The Sutton-Trust/EEF Teaching and Learning Toolkit rates metacognition as a high-impact, low-cost approach to improving the attainment of disadvantaged learners. The evidence suggests that use of these strategies can be worth the equivalent of an additional seven months’ progress.

Resilient pupils were also more likely to have a growth mindset. That is, resilient pupils recognise challenges as external, understanding they can be confronted and tackled. They believe that their efforts at school contribute to their success in school and the future.

Resilient pupils had high aspirations compared with their disadvantaged, low-achieving peers. By 15 years old, pupils should already have a good idea of the general level of jobs and education that are in scope for them. Therefore, any interventions that focus on raising aspirations should start from an earlier age.

As children return to schools, these findings re-emphasise the impact of disadvantage on educational attainment and life chances. But they also indicate which tools and strategies are likely to work best in the recovery effort – intervening early, positively, with a focus on subject knowledge and metacognitive strategies.