It’s more than five years since Ofsted’s Getting Ready for Work report looked at how secondary schools were preparing young people for employment. And in our post-Brexit, post-Covid and post-Ukraine world of economic risk and opportunity, work-readiness has never been more relevant.

Yet the report’s publication was followed quickly by a change of regime at Ofsted, and a narrower, ideologically driven view of curriculum means the inspectorate has not bothered to check whether things have improved since.

Given the challenges of the past two years, it seems unlikely they have. And that’s worrying, because its main findings were sobering. The extent to which schools engaged in work-readiness was largely dependent on whether school leaders considered it to be a priority. And where schools were delivering enterprise education, it was often unclear whether it was having any impact.

Meanwhile, business involvement relied too heavily on teachers’ and parents’ personal networks, potentially resulting in disadvantaged pupils missing out. And a lack of local coordination meant business leaders described the environment as ‘chaotic’.

In reality, that chaos has been just as true of the politics of work-related learning as of its implementation in schools. Until 2010, the Department for Children, Schools and Families had strongly supported enterprise education. Post-2010, the DfE had no interest in it and removed funding. Then, the Department for Business under Liberal Democrat leadership during the coalition tried to promote enterprise education in schools, and I remember the lead civil servant’s surprise when I told her about the DfE’s huge intellectual capital in that area. It turned out the DfE was unwilling to share it with the business department.

By 2014, David Cameron appointed Lord Young as his ‘enterprise advisor’. He established a number of advisory groups, one of which looked at enterprise in schools. Its key message was that enterprise education is not about turning young people into little entrepreneurs but something much broader and relevant to the nation’s economic future.

It has passed into folklore that Margaret Thatcher once said that “other people come to me with their problems. David Young comes with his achievements.” But despite this reputation, even he was unable to make any real difference beyond setting up a network of enterprise advisers.

Getting Ready for Work gave Ofsted one job (and bear in mind, this is a job Ofsted gave itself): “To ensure that inspection judgments take greater account of the coherence and rigour with which schools prepare pupils for employment and self-employment.”

Instead, its new inspection framework from 2019 took a minimalist approach. Just one of nine bullet points for the ‘good’ criteria under the personal development judgment is in any way relevant. It took the chief inspector’s grilling by the education select committee to add words to the effect that schools must meet “the requirements of the Baker Clause”.

There were recommendations for secondary schools, too. Were they followed, they would be transformational. But to this day, the negative consequences of failing to meet even the basic statutory requirements are unclear.

It seems that because the evidence from the survey upon which the report was based was that the quality of enterprise education was poor, the decision was made to simply stop looking. Imagine if the same was true of any other subject.

At the time of the Ofsted survey, another by the British Chambers of Commerce found that more than three-quarters of firms believed a lack of work experience was the reason young people were unprepared for work, while just over half (52 per cent) said they didn’t offer such placements, citing cost, time, administrative burden and lack of information.

Getting Ready for Work was well-received by the numerous organisations involved in enterprise education, work-related learning and financial education. But like Lord Young’s 2014 report for the business department and the PM’s office, Enterprise for All, its legacy is a testament to the harms of short-term government thinking.

In the meantime, the “high-wage, high-skill, high-productivity” economy Boris Johnson has promised seems more distant than ever without the skilled young people it needs to fuel it. 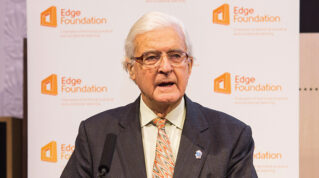