A since-closed free school was given the funding green light just nine working days before it was due to open, with civil servants issuing “dire warnings of impending closure” from day one, it has been claimed.

In a damning report revealing the chaotic behind-the-scenes process of opening a free school, former trustees and staff at the 14 to 19 Robert Owen academy, in Herefordshire, blamed a “veritable montage of ever-changing faces” from government departments, regional schools commissioners and Ofsted for the school’s demise.

The former staff have taken the unusual step of publishing an evaluation report to share the key findings from the failure of the school, which shut down in August last year after trustees decided against legal action over its closure.

The new report also alleges the school was “cast adrift” by the local authority. An offer of “significant investment” from a multi-millionaire prospective sponsor after the school fell in financial trouble was also “blocked” by the RSC, the report alleges.

After being granted its funding agreement on August 19, 2013 – just nine working days before it opened on September 1 – a civil servant allegedly told the then chair “welcome to the world of free schools”.

The report also claimed the school leaders were advised to “not share our detailed proposal” with the relevant local authorities, which “was later to cause difficulties in relationships”.

The report, seen exclusively by Schools Week, has four key recommendations for free schools: ensure the local authority is not hostile to the project; have experienced public relations staff; don’t open too early; and establish clear communication with civil servants.

A total of 55 free schools had closed as of December last year, many after failing to find suitable permanent sites, or failing to recruit enough pupils.

In the foreword, Dame Janet Trotter said the reasons for the closure were “complex; some are strategic, some administrative and some reflect the difficulty of putting the founding vision into practice in an increasingly competitive education market place”.

‘Welcome to the world of free schools’

The last-minute decision to award the school, which offered a vocational curriculum, funding in August 2013 came despite civil servants “already expressing concerns on the viability of the school and issuing dire warnings of impending closure”, according to the report.

It meant the school opened in September 2013 “with a reduced student intake and extra expenses way outside the agreed budget”, which alongside an unfinished school site “really laid the basis for the later failure”.

In its second year the school moved to “little more than a building site”, with rotting wooden window frames and leaking roofs.

In May 2015, the school was graded ‘inadequate’ over low staff expectations. The school had under recruited and succeeded in identifying the Eden Schools Academy Trust, in Manchester, as a new sponsor, which came with “significant” investment from a multi-millionaire to boost its finances.

However the RSC said they wanted a local trust to take the school, even though none was found, and the school’s offer to form a local academy partnership was also later rejected. 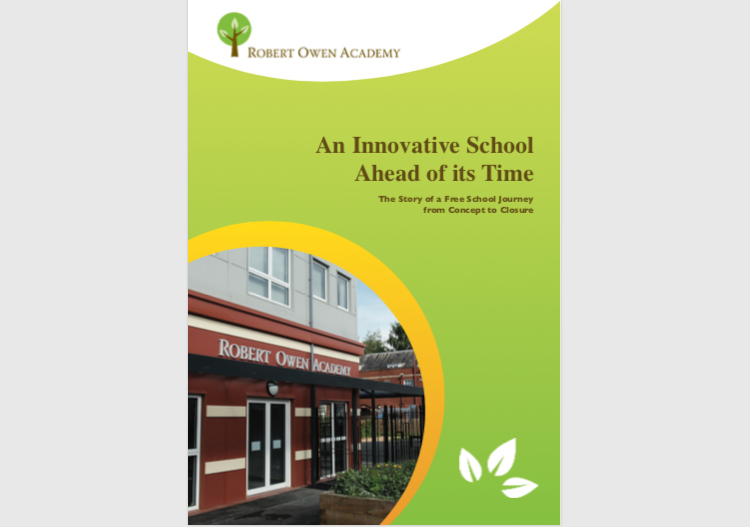 The DfE also turned down the school’s application “for reasons which have never been clear” to lower its admission age to 13 years, despite a supportive public consultation, said the report.

The school owed £600,000 to the ESFA for failing to recruit anticipated pupil numbers before being issued with a financial notice to improve in June 2016.

But the report claims the school was given “inconsistent advice” from the DfE, including being “told to spend the Robert Owen Academy income to the full to being reprimanded for doing so”.

Then Ofsted inspectors visited twice in November 2016, with the first group indicating a ‘requires improvement’ grade, says the report, before other inspectors later put it in special measures. The report blamed “external pressure” laid on inspectors.

Ofsted stated after two initial days of inspection, the watchdog decided it was “necessary to return to the school to gather further evidence to complete the inspection”.

A spokesperson added: “Once the inspection was complete, there was a single, confirmed judgement that placed the school in special measures. Our findings and judgements are made independently and based purely on inspection evidence.”

In February last year, RSC Christine Quinn said the school, which then had about 50 pupils, would close. It came a week after an Ofsted monitoring inspection found the new leadership team was driving improvements and had a fit action plan.

The report stated that the “view emerging” is that either the RSC or DfE, “encouraged” by the local Herefordshire council, wanted to reduce the capacity in the area and “alighted upon the Robert Owen Academy as the convenient sacrifice”.

“Quite clearly the motivation has shifted and changed over time and few of us have been able to detect any clarity to the reasoning. Without exception, it is agreed outside the magic circle of regional and national decision makers that those with the power wilfully refuse to understand what the academy did and tried to do it differently.”

A DfE spokesperson said the decision to close the Robert Owen academy “followed a review of alternative options and the consideration of stakeholder views.

“One of the many strengths of the free schools programme is that we can identify and intervene quickly wherever we find a failure.”

The report is due to be published on Thursday.