Dominic Herrington is the top performing regional schools commissioner (RSC) for the third year in a row, according to Schools Week league table analysis.

We have crunched the numbers to find out how the nation’s schools commissioners are faring after the Department for Education released data on the 2017-18 key performance indicators (KPIs) of RSCs last week.

Our analysis reveals how the RSCs are faring across nine KPIs (see below) and who did best overall.

Herrington, commissioner for south London and the south east of England, who in April was appointed national schools commissioner on a permanent basis, came out top again. He has been RSC for the region since July 2014.

In second place was Sue Baldwin, RSC for the east of England and north east London, who took up the post in August 2017. She climbed one place this year.

Next was John Edwards, commissioner for east Midlands and the Humber. Edwards, RSC since May 2017, who rose from fifth place in last year’s analysis.

In fourth position, down two spots, was Lisa Mannall, RSC for the south west of England. RSC since September 2017, it was announced earlier this year that Mannall will become the latest in a slew of commissioners to leave her post for an academy trust job later this year. 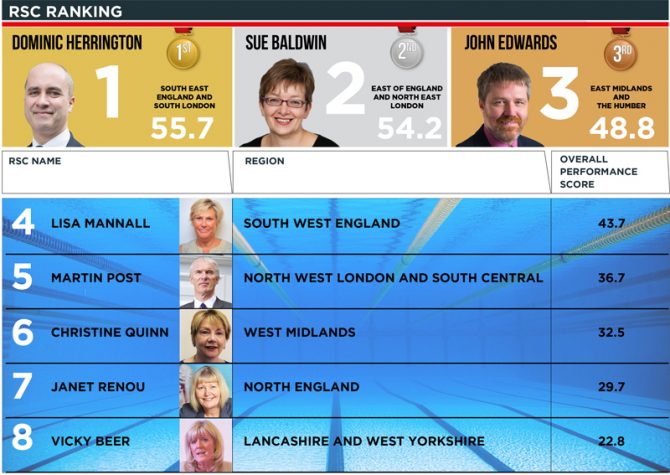 Those in the sixth, seventh and eighth spots have not moved since last year’s rankings.

In sixth place was Christine Quinn, who retired as RSC for West Midlands at the end of last year, with Andrew Warren appointed in January this year.

Next is Janet Renou, north England commissioner, who will also stand down this year. In last place is Vicky Beer, RSC for Lancashire and west Yorkshire.

In our analysis we awarded the commissioners a score out of eight for each of the key performance indicators (KPIs).

Top scores in each category got eight points, the second seven, down to the worst performers who got one point.

When there was a draw, then the median point score was awarded. We then added up the scores across the KPIs to determine the final ranking.

KPI 1i) Time taken for academies, free schools, UTCs and studio schools to move out of below the floor category

Edwards and Herrington came out joint top, with schools in their regions taking on average 1.3 years to move out of below the floor category.

Baldwin got the lowest point score for this KPI, with 1.5 years. The remaining RSCs all got the same point score as they hit 1.4 years.

Post came in last, with 45 per cent of his north west London and south central schools rated inadequate for more than 18 months. Next, at 43 per cent, was Beer, who came in final place in last year’s statistics.

Herrington came out top, at just eight per cent.

One striking difference compared to last year’s statistics is that there has been an increase across the board of schools being rated inadequate for more than 18 months.

Last year the highest percentage was 20 per cent and three RSCs had no schools rated inadequate for more than 18 months. This year, the lowest number was 38, in Herrington’s region.

Baldwin and Post came out joint top, with 1 per cent rated inadequate within three years of opening. Joint bottom with 3 per cent was Beer, Renou and Quinn.

There were four in top place with 8 per cent. These were Baldwin (87 academies), Post (82 academies), Mannall (88 academies) and Herrington (95 academies).

KPI 1v) Number and percentage of free schools, academies and sponsored academies that are good or outstanding in the region

This data was split into three separate tables, divided by types of school. We awarded points for each measure and then divided the scores to work out an overall average.

For free schools, Herrington came top with 93 per cent (77 schools) being good or outstanding. Mannall came bottom with 54 per cent (seven schools).

When it came to academies, Baldwin came top with 84 per cent (335) being good or outstanding. Bottom was Renou with 70 per cent (120). Herrington, who performed well with free schools, achieved the second-lowest rating in regards to academies, with 73 per cent (602).

Overall, Baldwin and Post had the joint highest score for this KPI and Renou had the lowest.

Quinn scored lowest here with 54 per cent (61 schools) opening as a converter academy within 12 months. Top was Herrington with 93 per cent (81).

Herrington came top again, this time with 23 per cent (six schools) and Beer came bottom with 6 per cent (two schools).

Top was Baldwin, with 88 per cent (959) of schools in the east of England and north East London region belonging to a MAT.

KPI 4ii) Multi Academy Trust (MAT) viability – number and percentage of MATs open for three years and over, that comprise of three or fewer schools

Renou did worst with 76 per cent of her MATs (61) open for three years or more having only three schools or fewer. Mannall scored top for MAT viability, with 48 per cent (58).

But when we look at the numbers, rather than percentages, Herrington did the worst with 107 MATs (proportional to 65 per cent).

How many schools are RSCs responsible for?

Edwards had the largest number of schools, with 1,239. Next was Mannall with 1,184 in the south west, then Herrington in the south east and south London with 1,148 and then Baldwin with 1,137 in the east of England and north east London.

Quinn had 1,096 in the West Midlands. And Beer had 841 in Lancashire and west Yorkshire.

Renou had the fewest schools, with 507 in the north of England.