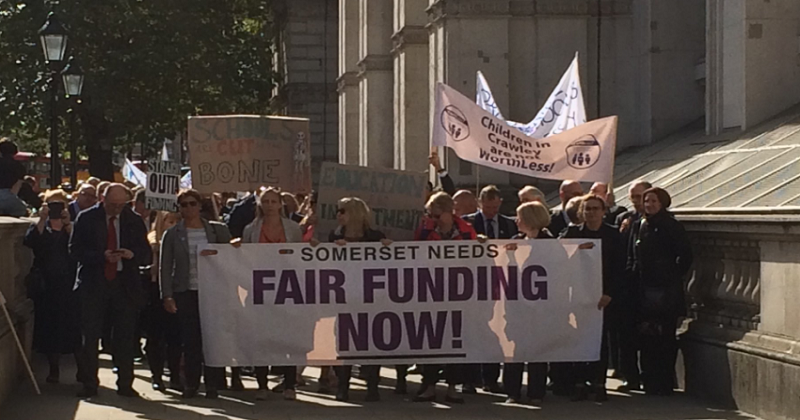 Headteachers staged a calm but determined march to Downing Street this morning, devoid of loud chanting but turning up in their numbers to make their point to ministers.

Schools Week joined hundreds of school leaders at 11am underneath the statue of Churchill in Parliament Square as they held their placards held high while camera crews crowded the area.

They walked only a short distance around the corner to Downing Street, with some whistling and clapping as others shouted that the government is “still not listening” about the crisis in funding.

But mostly the enormous crowd – estimated to be 2,000 heads in total – was quiet and held their banners aloft as they waited outside Downing Street for six representatives among them to be let through.

The lack of “protesting” was picked up on social media, including by ITV’s political editor Robert Peston who said because headteachers were “so well-behaved” – which he said was “presumably so as not to set a bad example to your students” – the march now might not make it into a TV news piece.

However other Twitter users were quick to applaud heads for their behaviour, with consultant Ben Verinder responding their “decorum will be part of the story”.

William Deighan, headteacher of Varndean School, tweeted: “We’re largely just mirroring the civilised discourse of the vast majority of our country. Bored of the extreme and polarised debate spewed into our front rooms. No apology for good manners.”

Head teachers ask if their schools are #worthless as they gather outside Parliament to say more cash is needed from ⁦@educationgovuk⁩ pic.twitter.com/f7hZ4yRCP0

But Vic Goddard, co-principal at Passmores academy in Essex, told Schools Week he was marching because “this generation of children are not being treated fairly.”

His school has already made redundancies and lost 10 “hard-working, committed members of staff” in the past two years and cannot cut any more costs, he added.

“It felt horrible from a personal perspective, and from the children’s perspective they’re losing resources.”

The heads entered the gates of Downing Street to present a letter to Theresa May laying out the issues they face.

The march to the prime minister’s house, called the ‘WorthLess?’ campaign, comes as schools continue to face overstretched budgets and difficult decisions.

As well as an eight per cent cut to funding in real terms since 2010, heads have recently been informed of a more than 40 per cent increase to employer pension contributions from next year and proposed teacher pay rises which look likely not to be fully funded as promised.

Some heads at the march said they were protesting the new National Funding Formula, which is not set to be fully rolled out until 2021, because their own schools will be left out of pocket.

Placards at the march stated that school budgets had been “cut to the bone” and chants claimed the government was “still not listening.”

Hundreds of heads have turned out to say enough is enough on school funding cuts. Will @DamianHinds listen? pic.twitter.com/bYBXjSLSqr

The Department for Education has repeatedly insisted there is more money going into schools than ever before.

But Geoff Barton, general secretary of the Association of School and College Leaders, said the claim had worn thin.

“We’re increasingly irritated by this because it’s the same old narrative all the time – that we’ve got more money than we’ve ever had.”

But teachers are also dealing with thousands more pupils as a population bulge moves through schools, and mental health support in schools require more resources, he added.

“I’m tired of the rhetoric – and these people here are tired of it too.”

Not a laughing matter…heads try new messages to get the government’s attention on school funding #stillnotlistening pic.twitter.com/FyTvPWEzVl