Government reforms to make school funding fairer will now not be fully implemented for at least another three years.

The Department for Education today launched another consultation over its national funding formula, asking schools how and when it should complete plans to end a “postcode lottery” between council areas.

Steve Edmonds, director of advice and guidance at the National Governance Association, said reforms should be implemented in the “minimum possible timetable”, but extra cash was most important amid stretched budgets.

Consultation documents show the government no longer has a “fixed target date” for finishing reforms, promising only “gradual” rollout from 2023 and further consultations.

It has been promising to fix “opaque” funding and “unfair” differences between similar schools since 2010.

Complexity, controversy over winners and losers and the pandemic have slowed progress, with multiple consultations and piecemeal reforms over the past decade, including a “floor” to prevent school losses.

The new national funding formula was introduced in 2018, standardising criteria for local authority grants. Schools minister Nick Gibb called it a “major step forward from the postcode lottery” before.

But the “soft” version used so far still gives councils and trusts significant discretion over how cash is divided between schools.

The rollout of the “hard” NFF  – allocating most cash via DfE rather than council criteria– was originally due to be completed by September 2020. The DfE confirmed in 2018 that it had pushed the target back to September 2021, and last year the government confirmed a further year’s delay.

Today’s consultation spells out that limited reforms to the current system mean schools still “do not all operate on a level playing field, and we are not fully delivering the fairer funding system the schools NFF is designed to achieve”.

While many councils now use NFF criteria, others’ use of their freedom to diverge leaves “significant differences”.

It cites the example of per-head funding for pupils with English as a second language, set at £1,485 under the NFF. But actual allocations vary from £200 in the East Riding of Yorkshire to just over £3,200 in Westminster.

It also says a large, deprived secondary school would receive £1.25 million more in Hackney than Kent.

But the DfE still said it proposes only a “minimum degree of movement” from 2023-24, and then a review of its impact “before deciding the next steps”. Councils may have to narrow funding differences between NFF criteria and their own by at least 10 per cent that year, 15 per cent by 2024-25 and 20 per cent by 2025-26.

It says much faster implementation would spell “turbulence” for school budgets.

The report states: “We are determined to complete these reforms, and secure the benefits that they will bring; but we want to move carefully towards this end goal over the coming years, working with the sector to ensure that the transition is a smooth one.”

Geoff Barton, general secretary of school leader’s union ASCL, welcomed the government’s caution and “direction of travel”, but warned there remained a “massive risk” of creating winners and losers. “The cake is too small, no matter how it is sliced.”

A National Audit Office report last week found the most deprived schools had seen funding drop 1.2 per cent in recent years, versus a 2.9 per cent increase for better-off schools.

It said more deprived schools continued to receive higher average funding, but the gap had “narrowed”.

The DfE also confirmed MATs will remain free to pool and redistribute some general annual grant funding between their schools, using their own rather than NFF criteria.

Kevin Courtney, joint general secretary of the National Education Union, said there were “no controls” and transparency even to parents over their GAG pooling decisions.

With most secondaries and almost half of primaries now in MATs, “proposals which ignore transparency of funding for these schools are meaningless”.

There are no plans to hand councils similar freedoms, which the DfE said reflected MATs’ “key role” in the government’s school improvement strategy.

Meanwhile schools forums will lose their role advising on local funding formulae, cash for growing schools and transferring funds between different blocks under the new system.

They will remain involved in early-years and SEND provision, but the representative local bodies face a “wider review” of their role and membership rules.

The consultation says a “new mechanism” may also be introduced into the NFF in place of the current block transfers used for councils facing significant and “unavoidable” SEND funding pressures.

Another consultation is planned following recommendations from the as-yet-unpublished SEND review. It could affect areas with high numbers of special schools.

The consultation further asks schools about their “appetite” for funding maintained schools on an academic year basis.

This would align it with how “most schools plan their staffing, spending and curriculum” and with academies’ funding. But the DfE acknowledged it could cause “complications” for accounting and reporting on a financial-year basis. 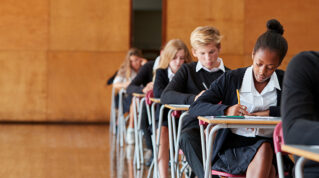