Private schools have seen a bigger jump in the number of top grades than state schools in this year’s A-level results, according to Ofqual.

Labour said the figures showed the Conservatives had “opened the door to unfairness”, noting private schools appear more likely to give prior access to questions and face parental pressure over grades.

Analysis released by the exams regulator today shows a 9.3 percentage point rise in the total number of A and A* grades issued to independent school pupils, higher than for state comprehensives, academies and grammars alike.

Every type of state school saw A or A* grades increase, but by a smaller amount in absolute terms. 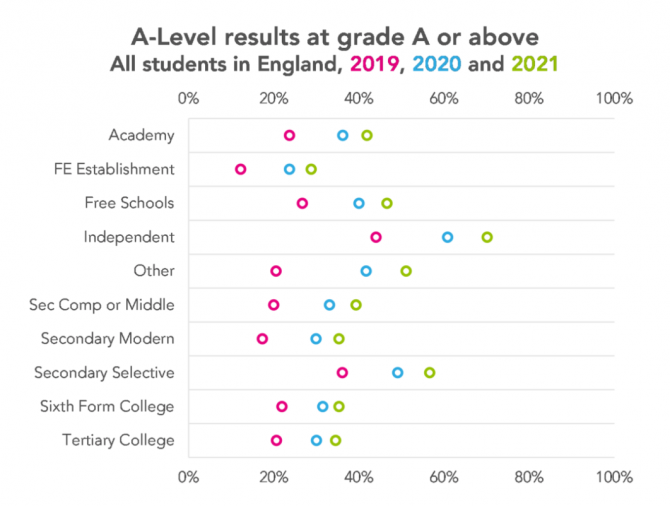 Private schools get more top grades than ever before, Datalab table

The greatest percentage point increase was seen not at private schools but at “other” centres, a category that includes language schools, higher education and tutorial colleges, special schools, pupil referral units, prisons and young offender institutes.

Grades at A and above at these centres rose by an average of 9.4 percentage points to make up 51.1 per cent of all grades in 2021.

But Ofqual said the differences could reflect “longstanding differences in the distribution of grades for different centre types”.

It noted a general increase in grades was “most likely to benefit students attending independent schools” at the top grades, as their results tend to be “clustered around” such grades.

“For other centre types, the impact of increased grades may be lower down the grade distribution – wherever most of their candidates are normally clustered.”

In relative terms, looking at the percentage increase rather than simply percentage points on last year, independent schools’ gains appear less of an outlier.

“Other” centres saw the biggest relative jump on last year, with the total number of A and above grades 22.5 per cent higher.

They were followed by FE establishments, with a 21.4 per cent increase, and comprehensives, up 18.7 per cent.

Academies saw a 15.8 per cent rise and independent centres, which already had the highest A or above-ranked grades, saw a 15.2 per cent rise. Sixth form colleges and free schools saw the lowest relative change versus 2020, up 12 per cent and 8 per cent respectively.

The figures are likely to spark renewed debate about the impact of Covid on learning across different schools, and how differently various school types handled teacher-assessed grades.

But a recently published Sutton Trust study found teachers at affluent schools were more likely to face parental pressure to change grades, and the schools more likely to use a wider variety of assessments.

Lenon said: “I don’t think it has anything to do with pushy parents or gaming the system. I know schools were aware of the danger and many sent letters warning parents not to try to influence teachers – they were quite firm about it.”