London schools had the biggest jump in the number of top A-level grades awarded this year of any region, with more than twice the increase seen in the north-east.

But more long-standing regional divides and statistical quirks could also be at play. Schools Week investigates …

Two in five of all grades achieved by students in the capital were at A or above, a 7.2 percentage point rise on last year.

Analysis by exams regulator Ofqual shows every region saw a rise in top grades. But the north-east had the smallest change in the total number, up just 3.6 percentage points. The north-west had the second smallest increase of 5.6 per cent. 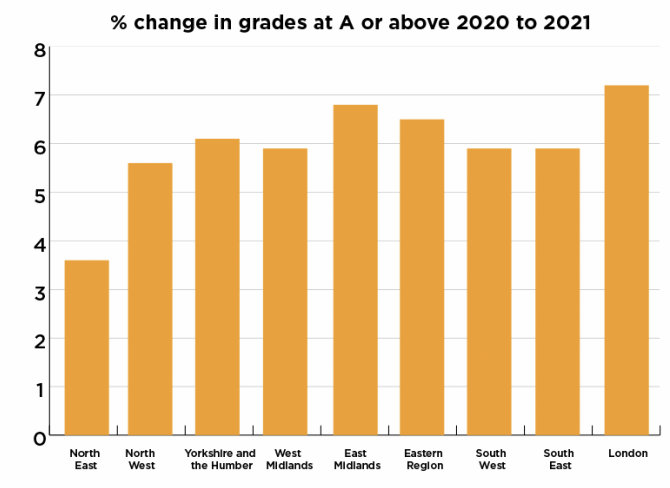 By contrast every other region saw grade Cs or above stay flat or increase, though by smaller margins than the rises at A or above. So why the difference?

Covid hit to the north?

“Today’s results have confirmed our fears that the pandemic has had a highly disproportionate impact across the Northern regions,” said Frank Norris, special adviser on education and schools to the Northern Powerhouse Partnership.

Analysis by Schools Week  of upper estimates for pupil Covid absences shows higher average weekly absence rates in the north-east than London for most of the autumn term and all of this year.

But this “changed dramatically towards the end of [autumn] term as the alpha variant of Covid took hold,” as FFT Education Datalab analysts noted earlier this year. London suffered the highest related absences of any region last December. 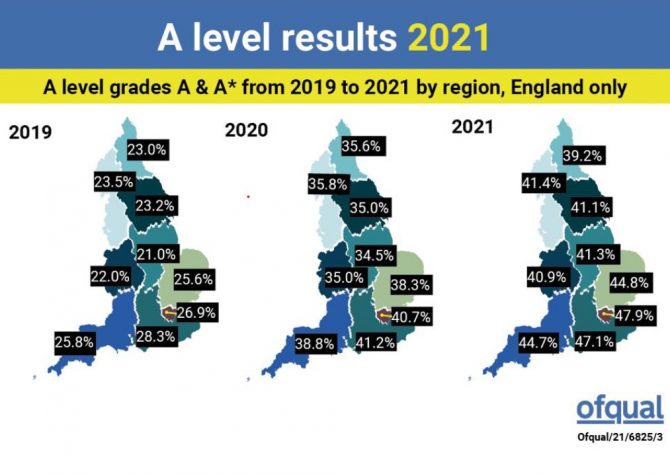 Ofqual analysis states the gaps between regions’ gains “partly reflect the well-established clustering of students around different parts of the grade distribution”.

The analysis did not give more details, but it appeared to be suggesting increases at grades A or C would be highest in the regions where most pupils were typically close to such brackets.

This means a general increase in grades across the board would be most likely to push more London students into the A or above bracket, if the capital’s students typically performed best.  Ofqual said such patterns could similarly explain the bigger jump in percentage point terms in private school candidates securing top grades compared to the state sector.

London did indeed record the highest share of all grades at A or above at 47.9 per cent, with the north-east at the bottom on 39.2 per cent.

The capital had been second-highest for the proportion of A grades the previous year, while the north-east had been fourth-lowest.

Yet the north-east and London had appeared to be in a similar starting position in relation to students securing C grades in 2020, at 88.1 per cent in both regions.

The North East saw a fall of -0.4% in the proportion of students achieving a Grade C or above – no other region saw any fall in this category.

The NE also saw the smallest increase in the proportion of students achieving a grade A. #alevelresults2021 pic.twitter.com/LT4F6w0WTc

Previous research for Ofqual, based on a review of academic studies, highlighted regional divides in learning experiences during the pandemic.

Only 9 per cent of students in the north-east received four or more offline pieces of work per day in spring and summer 2020, compared to a national average of 20 per cent. Northern regions also saw slightly lower levels of teacher-reported “parental engagement” and resources at home.

Meanwhile, students in London and south-east England were reported to have spent most time on schoolwork and received the most online teaching.

The report said some of the differing experiences could reflect regional deprivation, with Covid disruption also most affecting more deprived areas, as well as different school policies and different local responses to the pandemic.

Office for National Statistics data released in May showed London and the south-east had the highest disposable income per capita in 2018, while the north-east had the lowest.

“Regional differences in education are nothing new,” researchers at FFT Education Datalab noted in their analysis of the latest grades.

Ofqual also carried out an equalities analysis looking at different outcomes for students with similar prior attainment in different regions, in a bid to see how far the patterns in the latest results chime with pre-existing regional divides.

It found very little “notable change” in A-level outcomes between such similar pupils across most regions compared to both 2019 and 2020.

The exceptions included a 1.7 percentage point widening of the A grade gap between pupils in the south-east and south-west versus pupils with similar prior attainment in the south-east, compared to 2019.

Norris said students’ contrasting experiences suggested the need for “real urgency in agreeing and acting upon an education recovery plan that supports students in the future”.

He added: “This cannot wait any longer.”