No one has done much with the children’s minister post since Edward Timpson, say heads. Can the current incumbent finally tackle some of education’s trickiest issues?

The job description for the under-secretary of state for children and families looks rather like someone more senior took all the most intractable issues in education and handed them to a junior minister with a sigh of relief.

Listing the bits that relate just to schools, she or he must be on top of special educational needs and high-needs funding, alternative provision, children’s mental health, online safety, preventing bullying, school food (including free school meals), disadvantage and social mobility. The last two alone are a Herculean task.

That’s not to mention the non-school responsibilities: children’s social care covering adoption, care leavers and local authority performance, along with early years (critical, as we all know), childcare and (an innocent-sounding subject until Covid) “home learning environments”. Oh, and “policy to protect against serious violence”. It is, quite simply, a ridiculous brief.

Since Edward Timpson’s three-year spell ended in 2015, six politicians have held the role or overlapping posts and subsequently left (and, as one headteacher told me, “no one has really attempted to do anything since Timpson”). 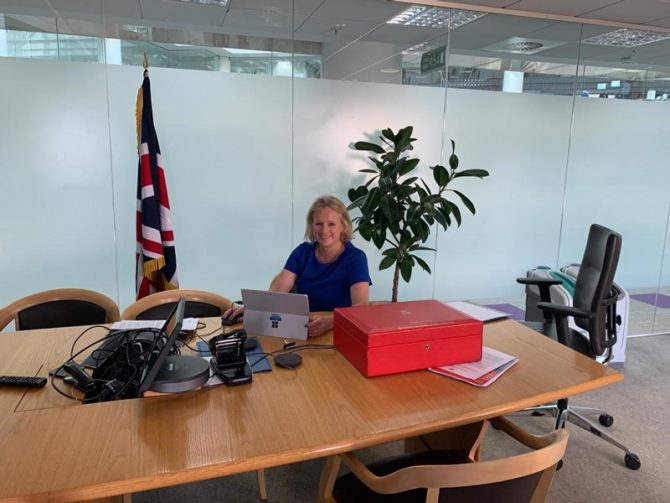 Such turbulence stands in stark contrast to Nick Gibb’s immovable presence as schools minister. Maybe the post is being treated as a stepping stone to greater futures, or people keep moving on because of the job’s intimidating brief?

Either way, perhaps Vicky Ford – who took on the gig in February – can be lucky number seven.

There are murmurs she might be at least trying to understand the to-do list, but to have any hope of doing so effectively she’ll need to bring together multiple actors and departments. Perhaps that’s why Ford keeps emphasising her skills as a consensus-seeker, a habit she says goes back to her childhood.

To my surprise, given her southern English accent, Ford was born in Northern Ireland at the beginning of “the Troubles” in 1967, to what she describes as a “very idyllic childhood”, with pigs, cows and dogs, attending a “fantastic primary school” in the town of Omagh.

“My parents were very involved in trying to bring people together across communities. I remember being tiny and going on peace marches with my mother,” says Ford. Both her parents were, as doctors, highly educated people, and her father stood for the Alliance Party of Northern Ireland, a centrist party dedicated to breaking down the unionist-nationalist divide. But serious tragedy struck when Ford was just ten years old. Her father died after being electrocuted in an accident at home.

“I called the ambulance. I don’t talk about it very much. It’s a constant reminder to me about children who have experienced trauma.”

She was lucky that her mother re-married to a loving stepfather, but other experiences from those days stay with her. “I do remember being in a classroom when a bomb went off, and ducking under the desk.” Ford never saw a firework in childhood until she went to England, with good reason. “Sending off fireworks to me is a sign you’re in a country that is at peace. I get very emotional on Bonfire Night.” Now it makes sense why bringing all sides to the table is an important principle for her.

I do remember being in a classroom when a bomb went off, and ducking under the desk

Along with losing a parent, Ford’s secondary years were quite uprooting. The middle child, she was sent to live with family relatives in England so she could attend the exclusive private St Paul’s Girls’ School in London, with her brother and sister staying with other relatives. “I wouldn’t recommend that.” But something her father had once said stuck with her. He had received a letter from his alma mater, Trinity College Cambridge, announcing the college was now accepting girls. “I remember he said, ‘Vicky, you could go there now’,” Ford recalls. She got a scholarship to Marlborough College, another private boarding school, and from there secured a place for maths at Trinity College, later switching to economics. 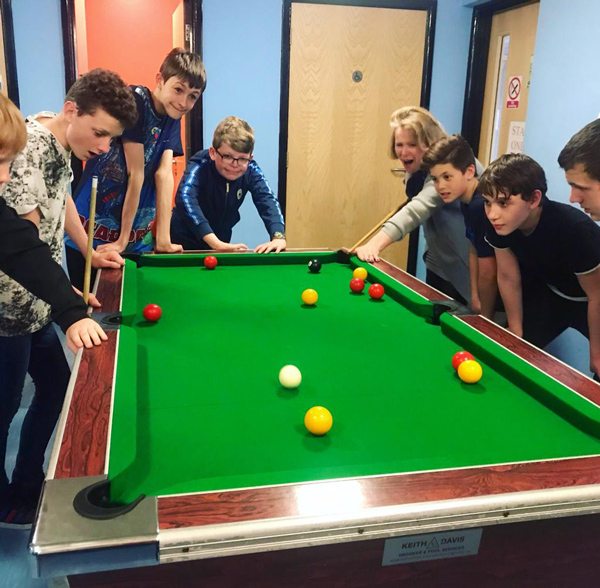 Like several previous children’s ministers, Ford went into banking and business after graduating. She worked at J. P. Morgan for 12 years, investing in large-scale infrastructure projects, including the first mobile phone masts in the UK, re-building projects in Eastern Europe post-1989 and electricity for townships in South Africa post-apartheid. She is evidently proud of the work and what she says prompted her towards politics is not what I expect.

“During 9/11 I was working at the top of Canary Wharf tower and we felt very vulnerable when the Twin Towers came down. I think it was the moment when many of us realised the impact political decisions have on one’s own communities.” Ford says the terrorist attack, and the worried conversations among parents at her children’s nursery, was her “turning point”. She left J. P. Morgan and became chair of a pre-school before getting “hooked” on local politics. She stood as a local councillor in south Cambridgeshire and lost, and then as an MP in Birmingham Northfield in 2005 and again lost. After the 2008 crash, she “went off to become a member of the European parliament, when it was very clear the UK needed people who had a financial background”.

While describing her time as MEP for the East of England (the first woman to hold the role), Ford’s experience in consensus-building becomes clearer. She led reforms to banking laws, “so governments don’t need to bail out banks if they fall into trouble” and to gun laws relating to semi-automatic firearms after the 2015 Paris attacks. She eventually chaired the parliament’s internal market committee, which among other things covers consumer safety, a passion for Ford following her father’s death. After voting Remain, and when Theresa May called the snap 2017 election, she returned and won Chelmsford, a Conservative safe seat.

Ford speaks more slowly than many politicians, not rattling through her words and displaying a certain conviction. She doesn’t have an experienced professional background in children’s issues and vulnerable groups, unlike shadow education secretary Kate Green. But she does speak often about the pre-school she chaired, and individual children she remembers – one struggling little boy, for instance, causes her to talk at length about the importance of early years intervention. 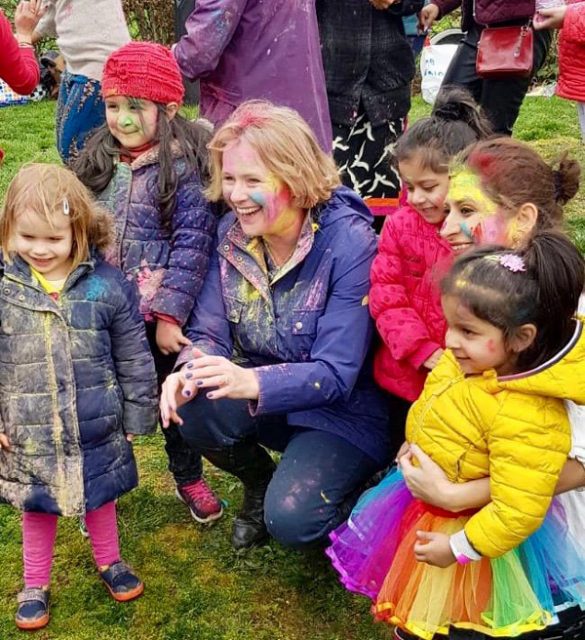 But there are big demands on her plate, demanding bold policy answers. Taking special educational needs alone, the situation is fairly dire. It has been six years since the promising Children and Families Act was passed, but the sector and even the government are largely agreed that it has failed to be implemented. Tribunal numbers are through the roof, the education select committee last year described parents wading through a “treacle of bureaucracy” and there is a lack of capacity causing councils to spend millions on sending pupils to the private sector. And yet the government’s promised SEND review, launched a year ago, continues to be delayed. Is Ford finally going to be the minister that gets this to work?

“I’m not going to run ahead of the SEND review – it’s an enormously complex subject – but we have to find a way to make the SEND system work better for children and families, while also not having that acceleration in funding requirements.”

I take her on to the £10,000 base funding for alternative provision and specialist placements, which has not been reviewed or increased with inflation, even while the National Funding Formula re-worked local school budgets. “I think it’s a much broader question than that. We need to look at AP throughout.” Ford points out she secured a one-off “post-16 transition fund” to help those in alternative provision move into education or training. But there are calls for AP to be permanently funded beyond year 11 through specialist sixth forms. Ford sidesteps this. “I want to see how that transition fund is working.”

What about free school meals? Schools Week exposed the problems with the Edenred national voucher scheme debacle this summer. Ford says she was “incredibly saddened” by reports some supermarkets were refusing vouchers but points out “no one had ever tried to launch a scheme like that so quickly”. Under the circumstances, she says she is enormously proud of it. When I ask whether the government will listen to footballer Marcus Rashford’s call for free school meals in the holidays, Ford also stands firm. “Right now I need schools to be focusing on school being normal […] for the dining room to be open when the school is open.”

In a way Ford’s job is like an impossible task unless it is tackled with serious determination over time. She seems keen to build bridges and, at least while she’s in post, to properly understand the brief.

The question is whether she’ll stay. Many of these questions, particularly around SEND, are so tricky they need someone to commit years to solving them. Can Ford be that someone?