The quality of alternative provision for excluded pupils varies wildly across the country, and even between adjacent authorities, exclusive data obtained by Schools Week reveals.

In fact, unequal funding structures between councils mean pupils can end up £4,000 worse off than those from neighbouring regions.

The data shows that 86 per cent of councils have alternative provision that is all either rated ‘good’ or ‘outstanding’ by Ofsted.

But there are four authorities where the only available alternative provision is graded at four, while in 15 others, more than half is ‘inadequate’ or ‘requires improvement’. 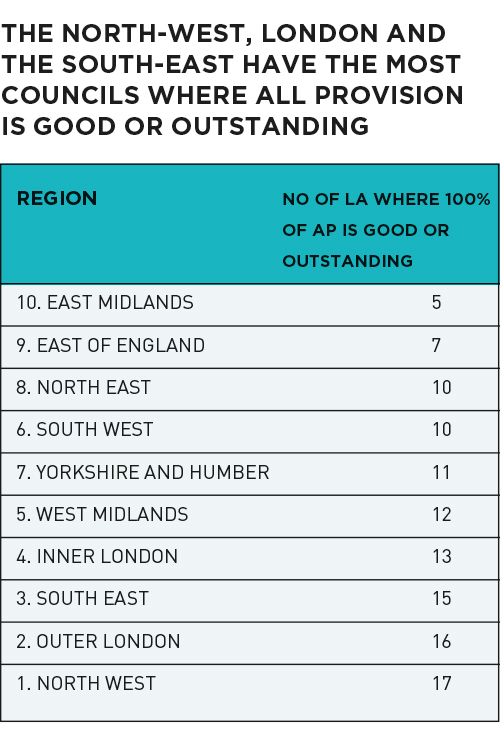 Schools are increasingly under pressure to show that pupils moved into alternative provision are receiving a decent education.

In 2016, Sean Harford, Ofsted’s director of education, warned that schools are responsible for the safety of pupils moved into other provision. Earlier this year, he asked inspectors to pay more attention to children who have been “off-rolled” and placed into other centres.

But funding varies according to the type of schools pupils move into, and where in the country they are placed, which clearly isn’t helping matters.

A child at a pupil-referral unit is automatically funded at a base rate of £10,000, with top-up money coming from the council.

Depending on how councils slice their funding, some PRUs end up with less than they need, according to Dave Whitaker, the executive principal at Springwell special and AP academy in Barnsley.

Two pupils in the referral units where he works have allocations that differ by £4,000 because they fall in different local authorities.

Pupils at AP academies and other private providers are funded at whatever level they had at the mainstream school they were excluded from, according to a spokesperson for Islington council in London, which has both a PRU and an AP school.

The funding for that excluded pupil “will definitely be less than £10,000”, they added.

The school which excluded the pupil pays the AP institution’s costs up to £10,000, and the council steps in to provide additional cash where necessary, though this is rare.

“If they’re on the PRU’s roll, there is more access to funding from the off,” said the spokesperson.

These funding disparities are likely to remain unchanged until the new national funding formula arrives.

The Department for Education said the new formula has been designed “alternative provision in mind”. 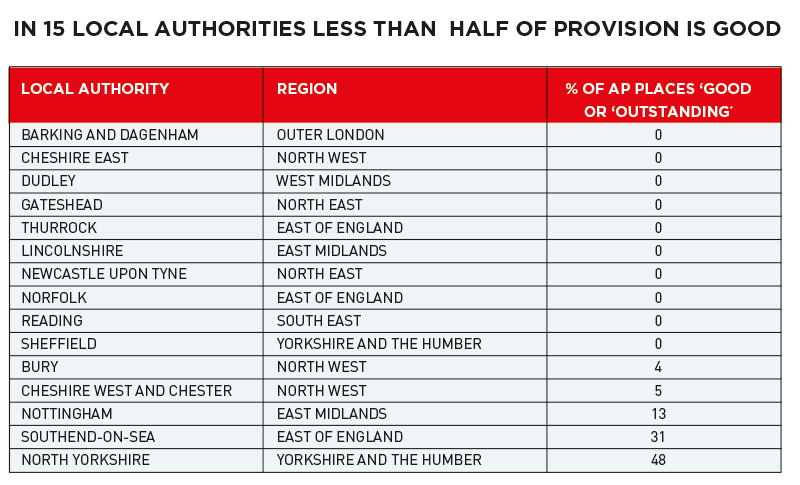 Over half of the places available in alternative provision in these areas are at schools rated ‘requires improvement’ or ‘inadequate’.

In some areas, the only state-funded provision on offer is in the bottom two Ofsted grades. One such area is Barking and Dagenham, the only London council in the poor performers list. 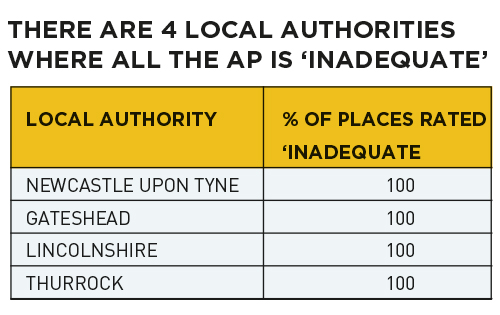 Four councils can only offer alternative provision with Ofsted’s very lowest rating, ‘inadequate’. Two of these, Gateshead and Newcastle, are in the north-east.

The Linhope PRU in Newcastle went from ‘good’ to special measures in February last year, mainly because safeguarding procedures were poor and too few pupils returned to mainstream schools.
The other two councils with only inadequate provision are Lincolnshire and Thurrock.