How to create a positive whole-school mental health culture

February 7, 2013 is the day Mississippi became the last US state to officially abolish slavery. (Yes you read that right!) It’s also the anniversary of the 1940 release of Walt Disney’s Pinocchio. This year, most secondary leaders marked the date as the LATEST day they would learn about this summer’s exam modifications.

LATEST. That is what we were promised. It didn’t take long to realise that, apart from the odd exception, it meant “on this date” and not “by this date” – a clever use of words to avoid any noses lengthening. The rest of this piece could bemoan why it has taken six months of a ten-month window to release this information but, well, there’s no time for that now.

The scene at Passmores was probably typical of lots of schools; heads of departments frantically checking exam board websites for what is and is not going to be examined. I could see down each teaching wing, and I could tell when information was in: a sudden flurry at the photocopier, lots of head scratching, pages turning, slightly manic conversations. Body language was enough to tell immediate responses.

Science seem happy… Oh! Maybe not. The biology lead looks relieved, but the head of chemistry looks like their rabbit died.

MFL seem a bit confused. What’s happening? They’re looking across the exam boards at each of the languages. Are there… differences?

At least the maths team seems happy with the topics that aren’t coming up. What’s that? There’s a section that says what? The topics may still appear?

You get the idea.

Having exams that people deem to be fair was always going to be challenging, and I don’t want to debate the rights and wrongs of holding them this year. The decision has been made.

However, it is nonsensical that the same subjects from different boards have made significantly different decisions. The defence from Ofqual is that any discrepancies will be rectified with different grade boundaries. But the reality is that our exam boards are profit-making businesses that want to come out of this with their reputations and profits enhanced – the regulator will have its work cut out.

It is also unclear why this information wasn’t available earlier, especially when I know that, for some subjects if not all, these decisions were taken in the summer and have been kept back until now. The rationale seems to have been to prevent schools from narrowing the curriculum too early and to discourage exam cramming. So, instead, those who can afford to spend a lot of money in a short space of time can use the information to access additional tutoring at home. And that is fairer?

Worse, allowing individual exam boards to make decisions for subjects in isolation from their competitors – and evidently from each other within their organisations – is bound to compound the already unequal experiences young people have had through Covid. I would have preferred that no parts of the syllabus were removed. A simple restructure of exams to allow students more question choice would have been ample.

Instead, the exam board and subject lottery means teachers will once again be in the firing line for decisions that they had no input into this summer. The pattern of late decisions and education having to get on with it continues. In an Animal Farm-style rewrite, the oft-repeated dictum from Spider-Man’s Uncle Ben that “with great power comes great responsibility” seems to have become “with our great power comes your great responsibility”.

February 7 is also the anniversary of the bonfire of the vanities. Ironically, we appear to have gone the other way and done everything we could to protect our system’s vanities.

There was an opportunity to be imaginative and innovative. Instead we have another hodgepodge. And all we can do, Jiminy Cricket-like, is grin and guide our students through it. 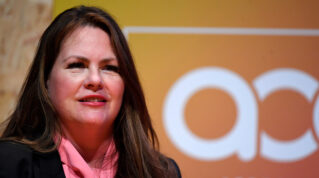