Two in five teachers work in schools that have buckets set up to catch drips when it rains, it has been revealed.

A survey of almost 3,500 teachers by Teacher Tapp also found that over a quarter do not believe their schools are in a good state of repair.

Forty-one per cent of teachers had at least one bucket to catch drips in their school building.

Teachers in local-authority maintained schools were worst hit: with 46 per cent saying they had buckets set up, compared to just over a quarter of surveyed teachers in the independent sector.

But the new survey is a timely reminder that schools are also struggling with crumbling buildings as capital funding is also squeezed.

Before last October’s budget, the Labour party calculated that government spending on school buildings dropped 40 per cent in the eight years between 2010-11 and 2018-19. 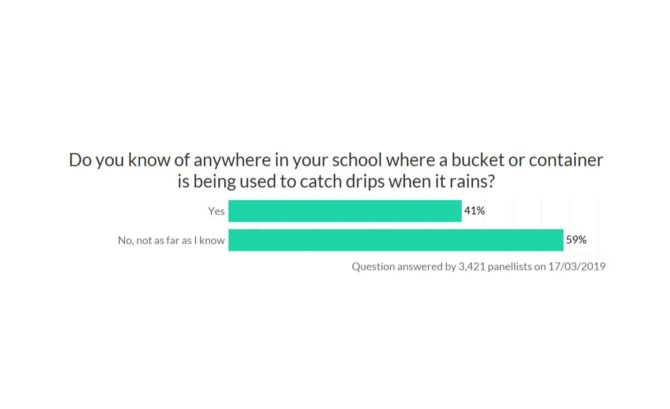 Responses to the Teacher Tapp survey revealed that 28 per cent of teachers did not agree that their school buildings were in a “generally good” state of repair. Of those, eight per cent strongly disagreed with the statement.

But there was some interesting variation by sector. A total of 19 per cent of teachers in council schools strongly agreed that their school buildings were in a good state of repair, compared to a third of teachers in private schools.

And just over a quarter of teachers in academy converters (good schools that chose to convert) strongly agreed with the statement – compared to 34 per cent in sponsored academies (normally failing schools that converted after government intervention). This suggests that failing schools are getting more capital funding pushed their way. 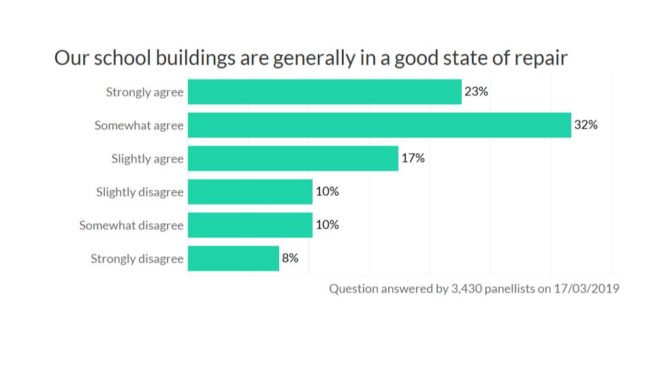 Teachers in schools built in the middle of the last century were more likely to report that buckets were used to catch drips.

The most modern schools, built during the 2010s, were the least likely to need buckets to catch drips, but 27 per cent of teachers in these schools still reported having to resort to them.

However, the amount – and choice of words – were strongly criticised. The additional cash amounted to an average pay-out of £10,000 per primary school or £50,000 per secondary. 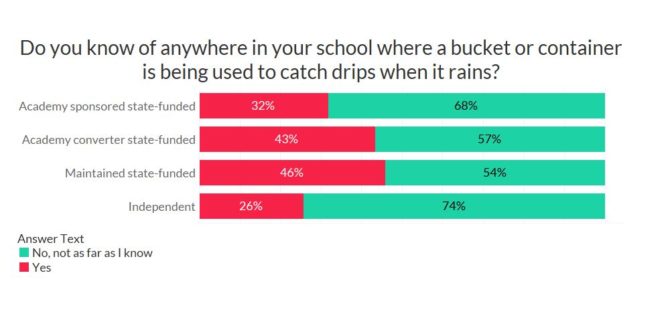 In 2017, the National Audit Office said £6.7 billion in capital expenditure was needed to bring all school buildings up to a satisfactory standard.

The latest forecasts show that the Department for Education’s capital budget will decrease from £5.6 billion in 2018-19 to £5.1 billion in 2019-20, and then to £4.5 billion in 2020-21. However, this does not account for any extra money that may be announced during the spending review.

A spokesperson for the DfE said £6 billion has been allocated in capital funding to “maintain and improve” the condition of school buildings since 2015.

She added: “In addition, our priority school building programme is rebuilding or refurbishing buildings at over 500 schools across the country and we are updating our information on the condition of state funded schools in England, so that we can carry on targeting funding to make further improvements.”

John Tomsett, headteacher at Huntington School in York, said his school received around £160,000 per year in recurrent capital funding in 2010 to “keep our ailing building maintained”.

He said the funding was cut to around £28,000 in 2011, adding on Twitter earlier this month: “The tangible impact of those cuts? A downpour today and a PC in the main office is ruined because we can’t afford to repair our flat roof.”