The performance of year 9 pupils in science has “dropped considerably”, an international study has found.

According to the latest trends in international mathematics and science study, performance in year 9 science dropped to a score “significantly lower” than in any iteration of the study going back to 1995.

The reasons for the change are “not obvious”, but said the impact of three-year GCSEs and the replacement of key stage 2 science tests with teacher assessment should be looked into further.

TIMSS is an international study looking at trends in maths and science across 58 countries. It is carried out every four years, and looks at pupils in years 5 and 9. The latest study was carried out between February and June last year, so involved pupils who are now in years 7 and 11.

Testing was conducted in 368 schools in England, with a sample of 9,595 pupils.

The study concluded that despite the drop in science at year 9, pupils in England still performed “significantly above the TIMSS centrepoint” in both subjects and at both ages.

But the drop in science has left researchers puzzled. The national report for England, put together by the UCL Institute for Education, found that the percentage of pupils performing below the low benchmark “doubled from 2015”. 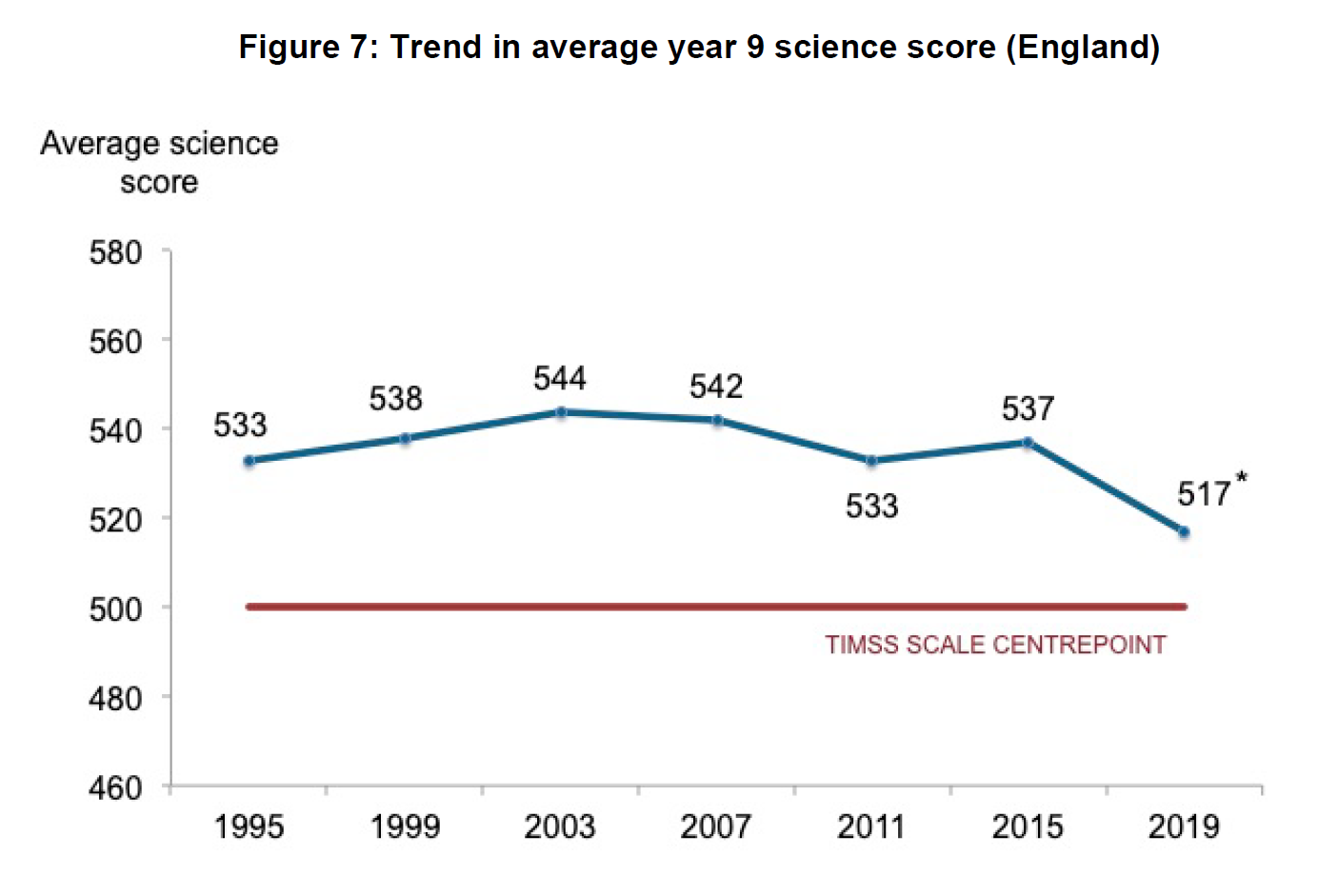 The report concluded that two issues were “worth further investigation” in relation to the drop in science: the rise in popularity of three-year GCSE courses starting in year 9, and the move in 2009 to replace formal key stage 2 tests in science with teacher assessment.

The move to three-year GCSE courses has been well documented, and has become the subject of a row between schools and Ofsted. Research has found that under the watchdog’s new inspection framework, schools running three-year GCSEs were more than twice as likely to be rated ‘inadequate’.

And on the scrapping of science tests, the report said research by the Wellcome Trust released in 2017 “suggests this might have led to a reduced emphasis on science in primary schools”.

“Whether this potential shift in emphasis still affects pupils three years later is an area that might warrant further investigation,” the report said.

Out of the 58 countries involved in the study, seven performed significantly better than England in year 5 maths: Chinese Taipei, Hong Kong, Japan, the Republic of Korea, Singapore, Northern Ireland and Russia.

Of those seven countries, all except Northern Ireland performed significantly better than England in year 9 maths.

In science, six countries performed significantly better than England in science at year 5. They were Chinese Taipei, Finland, Japan, the Republic of Korea, Russia and Singapore.

Dr Mary Richardson, one of the co-authors of the report from UCL, said the longitudinal data “can help us understand these trends and we will now seek to interpret why these trends have occurred”.

“For example, the study reveals that, unlike in 2015, year 5 boys’ average mathematics score was not significantly above year 5 girls’ scores.”

Nick Gibb, the schools minister, has welcomed today’s results, claiming the country’s continuing strong performance in maths “is testament to the hard work of teachers and a reflection of the reforms we have put in place to raise standards and ensure our young people are receiving a truly world class education”.

However, he acknowledged there was “more to do, including continuing to improve the quality of science teaching and increasing the number of young people studying science subjects, in order to address STEM skills shortages”.