The Department for Education has today published the latest school workforce census (November 2018). Schools Week has the key findings:

1. Teacher numbers are up, but it’s outstripped by the rise in pupils

We’re in a position again where the number of entrants is more than the number of leavers (well, just about – but it’s better than last year when more teachers left the profession than joined!)

2. Teacher retention rates are getting worse, too

Of the teachers who qualified in 2017, 84.7 per cent are still in service one year after qualifying. That’s slightly lower than the previous year’s one-year retention rate of 85.1 per cent.

Worryingly, the five-year retention rate has also dropped to 67.7 per cent for those who qualified in 2013, compared to 68.5 per cent in the previous year. 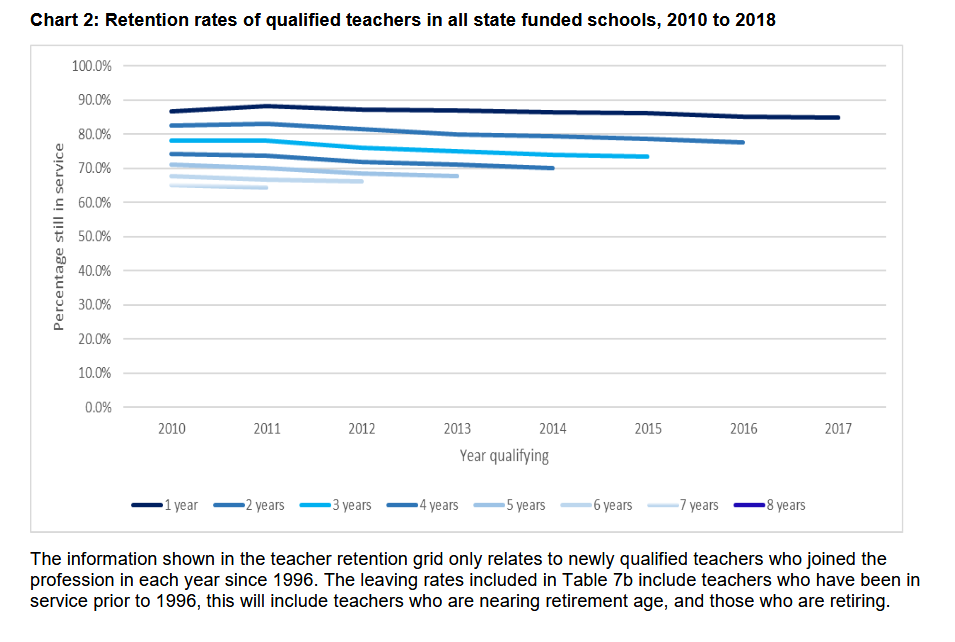 There were 44,600 FTE qualified new entrants in state funded schools in 2018, just over half were newly-qualified teachers, and 16,400 were returning to the sector.

However, there were also 42,100 that left. That’s mostly 35,600 qualified teachers who are out of service (which the DfE hopes “may come back as returners in a later year and those leaving the profession”). A total of 6,300 qualified teachers retired, and 130 teachers died during the year.

4. Teachers ARE taking up flexible working, but it’s driving a decrease in numbers

It looks like more teachers are taking up flexible working hours.

While 18,500 teachers increased their working hours, a greater number (25,300 or five per cent) decreased their hours. But, beware: “Between 2017 and 2018, such changes in working pattern produce a decrease equivalent to approximately 3,000 FTE qualified teachers”.

We don’t think this stat proves either, but it’s interesting nonetheless.

The ratio of pupils to teachers has remained stable or increased slightly for all school types except primary academies (where it fell from 21.2 in 2017 to 21 in 2018). 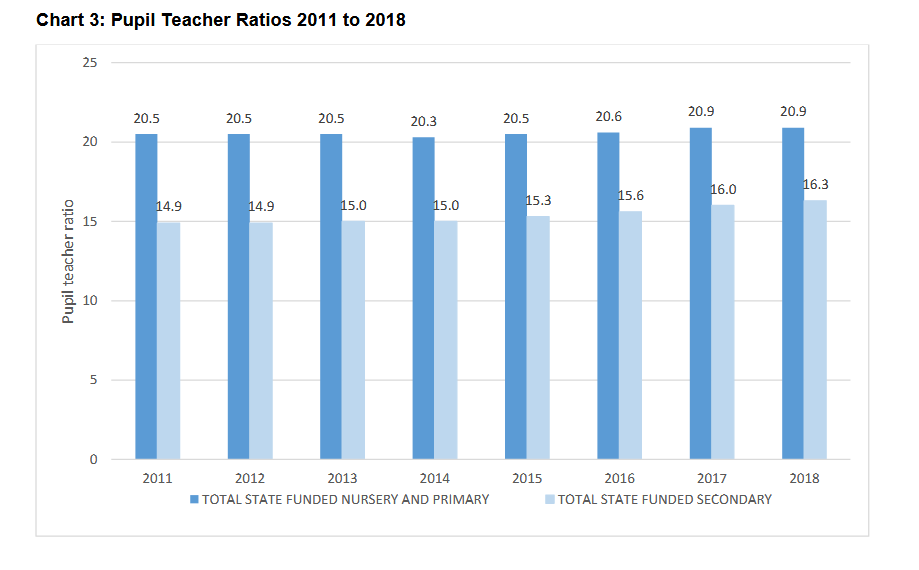 6. Teacher pay has risen, and men still get paid more

But average salaries are higher for male teachers across all grades. Male classroom teachers get paid £36,900, compared to £36,000 for women. The gap widens at leadership grades – with the average pay for men £62,700 compared to £57,200 for women.

7. Academy bosses get paid more than their LA counterparts (but teachers get less!)

Heads earn more in academies – £92,600 in secondary academies, compared to £90,800 in council-maintained secondaries.

BUT, secondary classroom teachers in academies actually earn less – £37,400 in academies, compared to £38,800 in maintained schools. 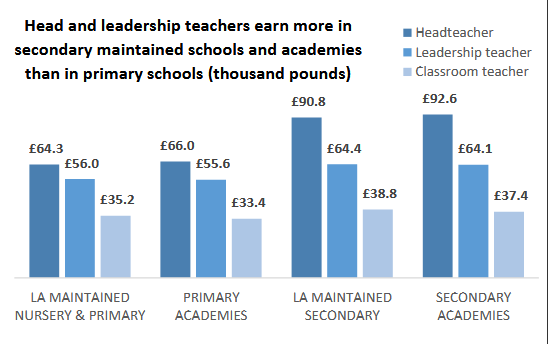 Just 32.6 per cent of teaching hours at key stage 4 were spent on non-EBacc subjects, and 35.6 per cent at key stage 3, which the report stated was “slightly lower” than in 2017.