Schools are getting bigger as pupil numbers continue to rise.

New data on schools, pupils and their characteristics data shows primary and secondary schools had an extra two pupils on average on their rolls in January compared with the same time last year, though special schools are growing even more.

Here’s what we learned from the data.

1. Schools are getting bigger

The average secondary school now has 948 pupils, two more than last year. Primary schools have an average of 281 pupils. Again, this is a rise of two since last year. 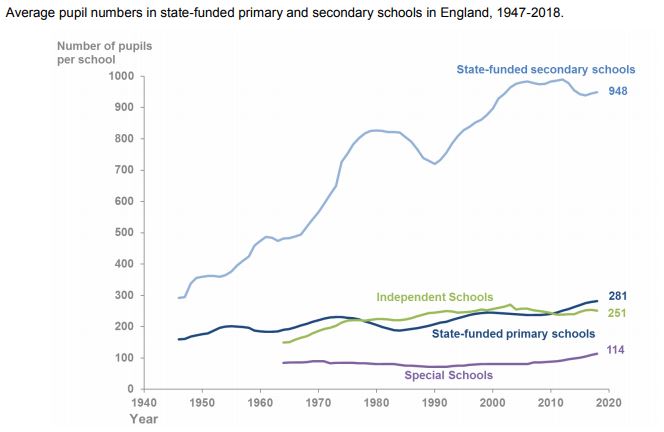 The proportion of pupils eligible for and claiming free school meals was 13.6 per cent in January, down from 14 per cent last year, and the lowest rate since data was first collected in 2001.

The decrease is put down to the fact that fewer families are receiving income-related benefits, on which free meal eligibility is based.

However, primary academies have a higher than average rate of eligibility, with 15.8 per cent of pupils eligible for FSM, compared with 14.1 per cent across all primary schools. This is a similar trend to last year.

3. More pupils are in academies or free schools

This is driven by a rise in the number of state-funded secondary schools (28 more than in 2017), special schools (six more), pupil referral units (one more) and independent schools (23 more).

However, there are 20 fewer primary schools open this year than last year.

The number of all-through schools also increased from 150 to 163.

5. Minority-ethnic pupils make up a third of primary children

In primary schools, 33 per cent of pupils of school age are of minority ethnic origins, an increase from 32 per cent in January 2017.

In secondary schools, 30 per cent of pupils are of minority-ethnic origins, an increase from 29 per cent in 2017.

There has also been a 0.6-point rise in the number of primary school pupils exposed to a language other than English at home, to 21 per cent of pupils. The figure has been steadily rising since 2006.

In secondary schools, 17 per cent of pupils are exposed to a non-English language at home. This rate has also increased by 0.4 points.

The rise in pupil numbers with an additional language is largely driven by increases in the birth rate, rather than direct current immigration, according to the report.