The Department for Education published the 2017 school workforce census figures this morning. Schools Week has the key findings:

The same proportion of teachers are now entering the profession as leaving it.

Over the same period the total number of teachers leaving the profession has stayed consistent at 9.9 per cent, with 42,830 teachers exiting in 2017. 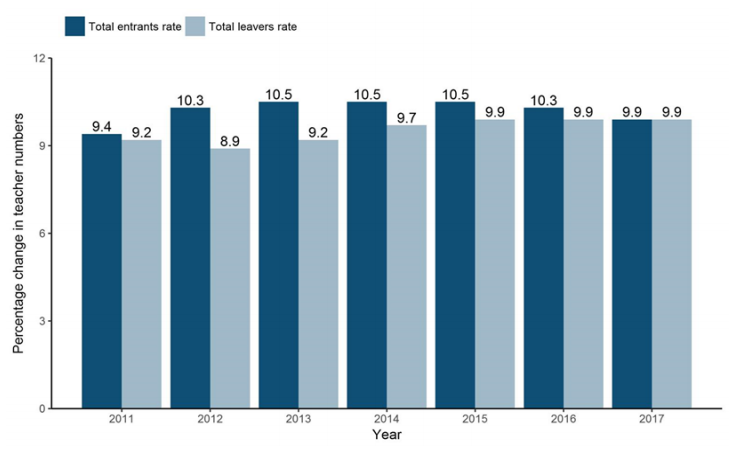 Part-time teachers are also leaving at a higher rate than those who are full time.

2. The total number of teachers has fallen

Before this numbers has been rising slowly since 2011, when the total number of full-time teachers was 440,000. 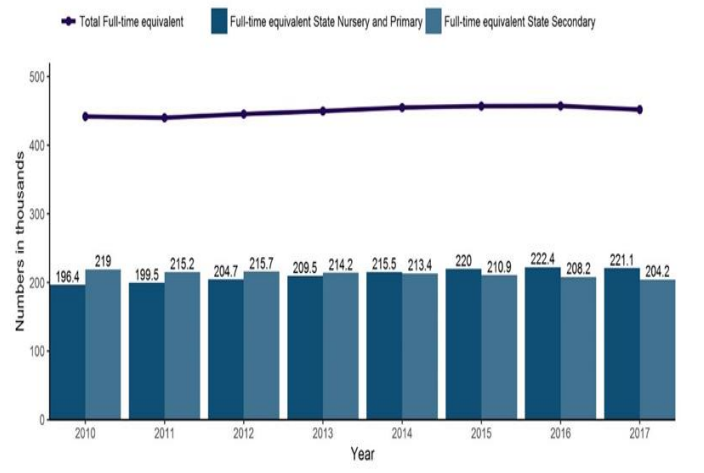 Numbers are projected to continue to increase until 2025, as the pupil bulge continues to move through the system.

The average salary for classroom teachers working in maintained nursery and primary schools was £34,300, compared with £32,600 for equivalent teachers at primary academy schools.

In LA maintained secondary schools the average salary was £38,000 compared with £36,500 for equivalent teachers in secondary academy schools.

For senior leaders the gap was smaller – the average wage in LA secondary schools was £63,700, against £63,600 for equivalent teachers in secondary academies.

4. Teaching is still a degree profession, but teachers might not hold a qualification in the subject they teach

The great majority of teachers (98.6 per cent) still hold qualifications at degree level or higher. Numbers have risen very slightly since 2016 when the equivalent figure was 98.5 per cent.

The percentage of teachers with relevant qualifications for the subjects they teach increased for 14 subjects last year, but decreased for 13 other subjects.

Ebacc subjects seeing an increase in teachers with relevant qualifications were maths, geography, French, German, other modern languages, while those with a decrease were English, physics, chemistry, biology, general science, other science, history, and Spanish.