The proportion of teachers moving to new jobs in other schools has risen rapidly over five years, a “churn” that is regularly overlooked by ministers within the retention crisis, according to new research.

The National Foundation for Educational Research has found that whereas five per cent of primary school teachers moved school in 2010-11, that figure almost doubled to nine per cent in 2014-15.

Similarly, the proportion of secondary school teachers who moved schools rose from four per cent to eight per cent.

The report, which is a new analysis of labour marketforce data from 2010 until 2016, comes as the government’s most recent analysis of teacher supply revealed the drop-out rate for teachers rose for every single subject, and the number of teachers leaving the profession was higher than those joining it.

The NFER report warns the higher rate of teachers moving schools could be causing a “divergence” in perspectives on teacher supply between the government’s “system-level” view that focuses on overall drop-out rates, and the “school-level” view which is concerned with vacancies when teachers move jobs.

Now the authors, who have analysed school workforce census data as well as the Labour Force survey and Understanding Society survey, have urged ministers to provide extra support to schools who are “disproportionately affected” by teachers moving jobs.

These include teachers in schools that are rated inadequate, the new research reveals.

Otherwise, school leaders will have to go on dealing with “more staffing uncertainties and higher costs of recruiting replacements,” they said. The report doesn’t suggest why more teachers are moving schools. 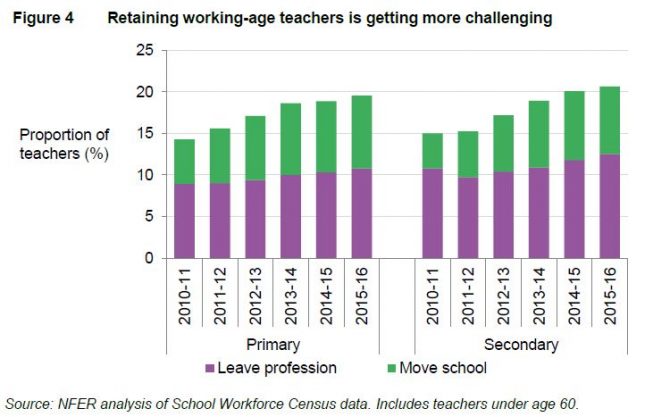 The warning comes as education secretary Damian Hinds faced criticism for failing to mention the teacher recruitment and retention crisis in his first Conservative party conference speech this month.

Hinds had pledged to make tackling teacher shortages a “top priority” at the Association of School and College Leaders’ annual conference earlier this year, and provoked controversy by appearing to say teachers who move schools are a cause of funding pressures in schools, rather than the Department for Education’s own budget cuts.

Firstly, a teacher’s years of experience is an important factor. Inexperienced teachers moving school may want to gain more experience in different schools, improve their pay or gain a promotion, said the report.

The Ofsted rating of the school is also an important predictor of a teacher’s decision to find a teaching job elsewhere. The rate of teachers leaving the worst-rated schools has risen (see graph below).

School leaders need to identify and support good teachers who are working hard to turn inadequate schools around, so that they do not “drift away”, the report stated.

An Ofsted spokesperson said the inspectorate’s proposals to refocus on quality of education in its new inspection framework would help recognise those teachers working in challenging circumstances.

Meanwhile Hinds said in a statement the government has already taken a series of steps to help teachers’ work-life balance, but “there is more to do” and he will set out a recruitment and retention strategy soon.

Read more about the key findings from the report here. 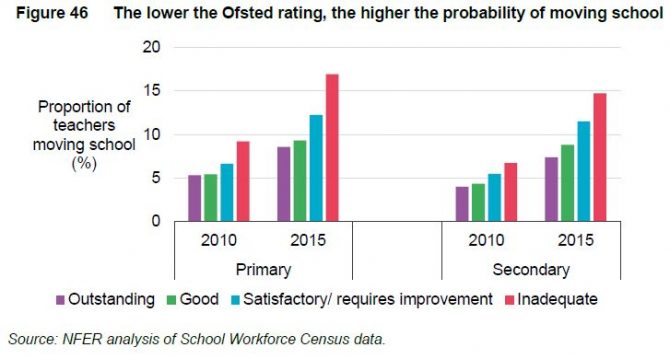