Teachers who work longer hours are slightly more likely to stay in the profession, according to new research.

The Ofsted rating of a school is also the most important school-level factor in terms of teachers quitting, the National Foundation for Educational Research has found.

Researchers analysed school workforce census data as well as the Labour Force survey and Understanding Society survey from 2010 to 2016 to investigate “in closer detail” than previous studies the factors that cause teachers to quit.

The researchers also conducted interviews with nurses and police officers, to compare teacher supply with the same issue in those sectors.

1. Teachers who work longer hours are slightly more likely to stay in their jobs

Teachers’ probability of leaving the profession and their working hours have a statistically significant negative relationship, the research found.

This suggests teachers who work longer hours do not have a higher probability of leaving the profession, and are even slightly more likely to stay in the profession.

Teachers who are unable or unwilling to work long hours may find their workload becomes “unmanageable” and so are the most likely to leave, said the authors.

It backs research by Sam Sims at FFT Education Datalab who found it’s not long hours but the feeling workload is undo-able that is the key factor in quitting.

2. Ofsted judgement is most important school-level factor for quitting or moving jobs

The most important school-level factor that is associated with leaving the profession and moving school is the school’s Ofsted rating, the NFER found.

The NFER research confirms previous findings by Sims that there is an immediate impact of being downgraded to, or re-graded as, ‘inadequate’ on the probability of a teacher leaving the profession.

3. Teachers’ average hourly pay is lower than both nurses and police officers

The researchers ran a scenario in which they assumed teachers work a solid three weeks across all their school holidays. If this is the case, teachers real average hourly pay would be £17.10 in 2015-16.

This would mean teachers work the most hours per year out of policing, nursing and teaching and have the lowest real average hourly pay.

Teachers work the most hours per year out of policing, nursing and teaching

4. One third of teachers who leave the profession move to private schools

Of teachers who leave jobs in state schools, 33 per cent moved into the private sector.

Thirty per cent retired, eight per cent took a non-teaching role in a school and two per cent became teaching assistants. Other roles included becoming self-employed and looking after family.

The quitting rate of older teachers who don’t teach one of the ‘core’ EBacc subjects which count in performance league tables has risen (see graph below).

Older teachers of non-EBacc subjects have been an important driver of the reduction in the proportion of teachers aged over 50, resulting in a younger workforce, warned the report. 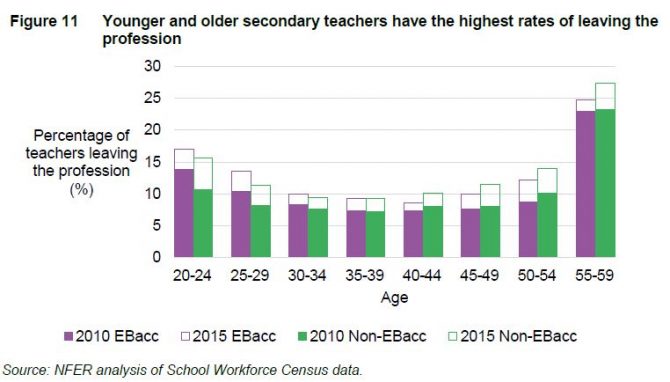 6. Almost 80 per cent of teachers are satisfied with their job

Despite longer term-time working hours and lower satisfaction with their amount of leisure time, 79 per cent of teachers report that they are satisfied with their job, which is about the same as nurses and police officers.

But self-reported job satisfaction improves considerably after teachers leave the profession for a new job and it consistently remains higher than it was when they were a teacher.

This “disproportionate shift” of mid-career teachers out of London schools may also put particular pressure on the senior leadership pipeline in London, said the report.

As a result, early-career teachers are accelerated into middle leadership positions more quickly in London than they are in other areas. But this may leave them feeling underqualified and therefore “overwhelmed” by their extra responsibilities, warn authors.