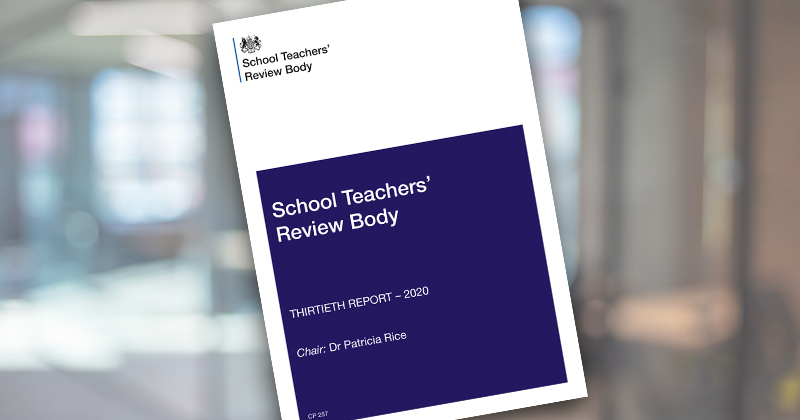 The independent body that reviews teacher pay has fired a warning shot over the government’s pay proposals – saying further lower increases for senior staff could result in teacher supply continuing to stagnate.

The School Teachers’ Review Body has published its 2020 report today, which resulted in the government approving an overall 3.1 per cent pay increase.

But, despite what the government boasting this is the biggest pay increase for 15 years, the board has again warned of teacher supply concerns.

Here’s what you need to know from the 137-page report.

The government had proposed rises ranging from 6.7 per cent for new starters to 2.5 per cent for experienced teachers and heads.

In its submissions, the Department for Education said that “experienced teachers generally left the profession for reasons other than pay” so they expected the proposals to have a “neutral impact on the retention of experienced teachers”.

But the STRB wasn’t convinced this struck the “right balance”, saying: “Unless the pay levels for experienced classroom teachers are competitive in the graduate labour market, the objective of improving the overall state of teacher supply is unlikely to be attained.”

The report added: “We are also concerned that experienced teachers and school leaders should receive a significant real-terms pay uplift to avoid damage to morale and motivation, which would have possible consequences for teacher retention.”

Instead the body proposed tweaked this to 5.5 per cent for new starters and 2.75 per cent for others, which was accepted by ministers. The STRB said a 2.75 per cent uplift would make the “framework as a whole more competitive relative to other professional occupations to support the retention of experienced teachers and school leaders”.

The government had also proposed lower uplifts for the London regions, but the STRB said the same rises should be applied because of the region’s “acute retention challenges”.

The STRB has been raising concerns over stagnating pay for years. This year’s report adds the problems with teacher supply are still “severe and persistent” and remains “significant concern”, particularly with the future bulge in secondary pupils.

The report said this presents a “significant risk to the effectiveness of the system as a whole and its ability to deliver excellent pupil outcomes”.

“We conclude that the deterioration in the competitiveness of the teacher pay framework relative to other graduate professions over the last decade is a key factor in driving these negative trends in teacher recruitment and retention.”

Education secretary Gavin Williamson told the board that it was “likely that employment in the public sector would be an attractive option in the short to medium term due to the impact on COVID-19 and that this would provide an opportunity to attract “truly amazing” teachers to the profession.”

We’ve written more on the potential boost for teacher recruitment from the coronavirus pandemic here.

4. STRB refuses to conclude whether rises are affordable

The STRB was told it “must have regard” to whether proposals are affordable for schools. But they somewhat ducked out of providing an answer, saying while there will be a “significant” per-pupil funding increase next year, it is “difficult and complex” to form a “clear assessment of affordability”.

This was down to the local variation in funding via the soft national funding formula and schools having autonomy over actually providing rises.

But they urged schools to place “significant priority on teacher pay when setting their budgets” by using a “substantial proportion of the new funding”.

Unions have already raised concerns that all schools will be able to afford the pay increase, highlighting the government’s increase in school funding isn’t as attractive as it seems.

5. The STRB wants to review leadership pay after CEO concerns …

The last substantial review of the leadership structure was in 2014, and the STRB invited the DfE to consider setting a remit for them to take a look.

The report stated several consultees “raised concern” about pay for academy leaders and chief executives, with suggestions such salaries should be brought under the School Teachers’ Pay and Conditions Document.

The STRB said the remit of such a review would be up to the DfE to decide, though.

6. … as well as the upper pay range, and performance-related pay

The STRB said there’s also a need to further review the classroom teacher pay structure, including the role of the upper pay range in this structure and the system for linking progression to performance appraisals.

While they were asked to look at the upper pay range as part of this review, they said a more detailed look is needed – mostly to ensure that schools would have enough time to prepare for any major changes.

But the report warned: “Given the high proportion of the teacher workforce who are on the UPR and leadership group pay range, it would only take a relatively small increase in their wastage rates to result in a substantial number of teachers leaving the profession. This is of particular concern at the present time when experienced teachers and school leaders are essential in ensuring the school system adapts to the effects of the COVID-19 pandemic.”

The STRB said it would also be appropriate to delve further into performance-related pay, too.

This could include looking at the “right balance between development and performance discussions to ensure that the benefits of linking progression to performance appraisal, in terms of rewarding teachers as they develop their capability and expertise, is proportionate to the workload involved in operating the pay progression system”.

The STRB found some leaders believed that it was “unnecessarily bureaucratic” and a “hoop jumping exercise, with a trend of schools moving away from linking progression to pupils’ attainment because teachers and leaders felt there were too many variables involved.

Welcome to Governance (eighth edition) and The Chair’s Handbook (fifth...

How can we help students to...