The government has confirmed today that starting salaries for new teachers will rise by 5.5 per cent next year, with the upper and lower boundaries of the pay ranges for all other teachers to rise by 2.75 per cent.

The recommendations amount to a 3.1 per cent increase in the overall pay bill for 2020-21 – which will be funded by schools.

The government says this is affordable as schools will get £2.6 billion extra funding next year as part of the government’s three-year funding increase.

However unions have already warned once extra costs are taken out of this, such as to fund increases in pay and pupil numbers, not much is left to reverse years of funding cuts.

In a press release today, the Department for Education said it had accepted all of the independent School Teachers’ Review Body’s recommendations, which amount to the biggest teacher pay rise in 15 years.

The full STRB report is due to be published later this morning.

The 5.5 per cent increase in starting salaries is worth up to £1,677 extra per year, depending on location.

The hike is the first step to delivering the government’s commitment to increase new teacher pay to £30,000 by 2022.

The pay increase for classroom teachers is equivalent to on average £1,250, and works out as an extra £1,970 on average for headteachers.

The STRB has also recommended the introduction of advisory pay points on the main and upper pay range to support schools to “adopt a pay structure which best supports recruitment and retention”. (See table below).

The government said this will set out “possible pathway of pay progression through which teachers can be recognised and rewarded as they build their expertise in the classroom”.

Funding to cover past increases to teacher pay and pensions, currently worth £2 billion in separate grant funding, will continue and be rolled into the national funding formula from 2021.

However Geoff Barton, general secretary of the Association of School and College Leaders, said it was not “fair or reasonable” that the rise is “much lower for experienced teachers and leaders after years of pay austerity which has seen the real value of salaries deteriorate”.

“This won’t help to keep long-serving teachers in the profession and feels like a kick in the teeth,” he added.

He was also “concerned” whether all schools will be able to afford the rises, adding: “Even in the best case, it means that most of the extra money provided in the settlement will go on the pay award with very little left to reverse the impact of real-terms cuts in government funding in recent years.”

An analysis by ASCL earlier this year found the government’s £7.1 billion extra funding actually amounted to just £14 extra per school once other rising costs and government promises were accounted for. 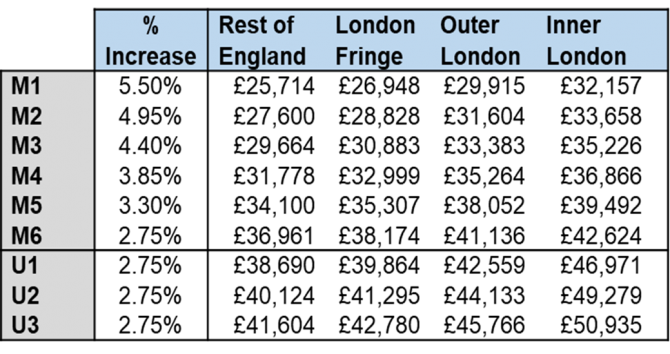