The government has published a wide-ranging new analysis of data on teacher supply, retention and mobility.

Officials analysed the school workforce census data, initial teacher training statistics and pupil projections, and looked at factors like how far teachers are willing to travel for a job, and the Ofsted grades of schools that attract the most teachers.

1. More NQTs are getting jobs

The national teacher shortage seems to be making it easier for new recruits to get jobs.

Of the 2014-15 cohort of newly-qualified teachers, 85 per cent got jobs in the state sector within two years of qualifying.

The Department for Education  claims the rate will never reach 100 per cent because some trainees will always go into private schools. 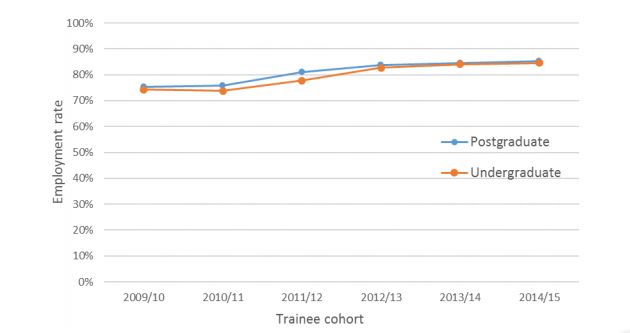 2. Teachers are confounding expectations by moving to ‘inadequate’ schools

The number of teachers moving to schools with an ‘inadequate’ or ‘requires improvement’ Ofsted rating is almost twice what the government predicted.

Based on the number of schools rated ‘inadequate’ by Ofsted and the movement of teachers, the DfE expected 1,158 teachers to move to a school with the lowest rating in 2015-16.

However, 2,007 teachers moved to ‘inadequate’-rated schools that year.

This may be because struggling schools are more likely to have job vacancy, and so “there is likely to be more movement to those schools”.

Teachers may also “have an aspiration to help raise the standards in schools currently rated poorly by Ofsted”, the report noted.

Trainees who use school-centred initial training (SCITT) routes are more likely than those from university routes to get jobs.

Of the trainees in the 2014-15 cohort, 88 per cent who did their training at SCITTs got jobs within the first two years, while 85 per cent from higher education institutions secured employment within the same timeframe.

Across the last six cohorts of trainees, those from SCITTs have been five percentage points more likely to get a job. 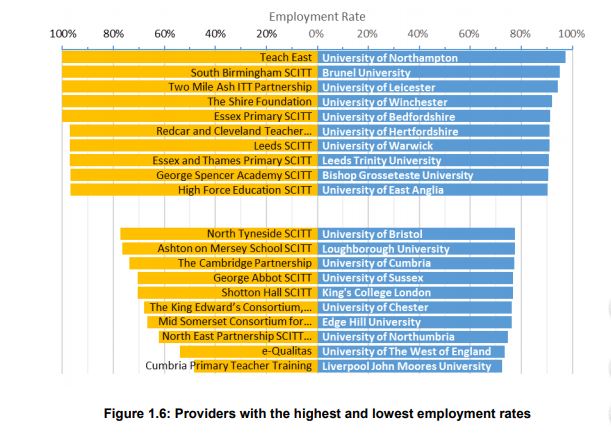 Teach First had an average employment rate of 93 per cent over the six cohorts.

Trainees who specialise in the EBacc subjects are more likely to get jobs than those in non-EBacc subjects, and have been for the last six years.

But after an initial dip in employment rates for non-EBacc teachers in 2010-11, the gap has narrowed. 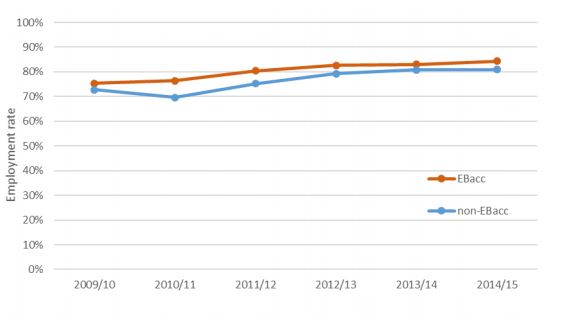 There’s also variation within EBacc subjects. Around 90 per cent of trainees in English, history and geography got jobs within two years, but only about 75 per cent of physics and modern foreign languages trainees did.

Languages and physics trainees could be less likely than others to go into teaching after qualifying, or more likely to get jobs in private schools.

Meanwhile, trainee primary school teachers remain more likely than their secondary counterparts to be employed within two years of completing their training. 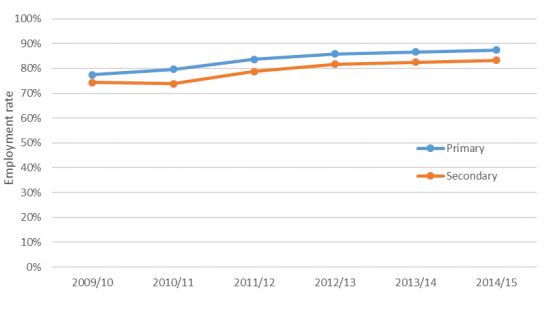 5. The north-west lags behind on employment rates

Trainees at providers in the east Midlands and east of England have consistently had some of the best employment rates, with the west Midlands also catching up for the latest cohort.

However, providers in the north -est have consistently had the lowest employment rates. This may indicate “NQT supply is outweighing demand” in that area.

6. Most NQTs get jobs near their training provider

Around half (50.1 per cent) of NQTs took their first teaching role in a school within 25 kilometres of their ITT provider.

Just over three quarters (76.6 per cent) travelled less than 60 kilometres. Only six per cent moved more than 200 kilometres from their training centre to their first job.

Graduates from providers in the south-west travelled the furthest, with only 69 per cent staying within 100km, probably due to the area’s “sparse population density” and lack of nearby available jobs. Trainees made the shortest journeys in London and the east of England.

Younger trainees are more likely to travel further. Just 68 per cent of those aged under 25 stayed within 50 kilometres of their ITT provider, whereas for those over 35 this rose to 82 per cent.

Even when they change jobs, 70 per cent of teachers move to schools just 20km or less away, or “within commuting distance”.