The number of GCSEs awarded in England increased by two per cent last year, reversing a downward trend.

The number of GCSEs awarded had declined in recent years, from 5,917,050 in 2012-13, caused by a decrease in the number of secondary school-age pupils. 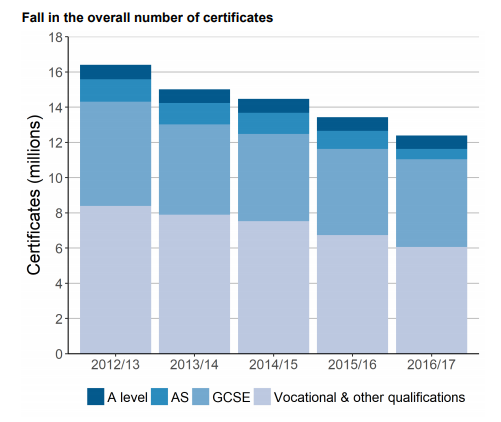 Ofqual puts last year’s rise down to the reaction of schools to changes to performance tables. GCSEs were the only type of qualification for which there was an increase in awards in 2016-17.

There was a particular increase in the number of English language and literature GCSE certificates, as level one and two certificates in these subjects were removed from school performance tables.

AQA continues to hold the largest market share for GCSEs. The exam board was responsible for 53 per cent of all certificates last year, up from 46 per cent in 2015-16.

Pearson holds 28 per cent of the GCSE marget, while OCR holds 13 per cent, and WJEC, the Welsh exam board, holds six per cent. All three saw their market shares decrease last year. 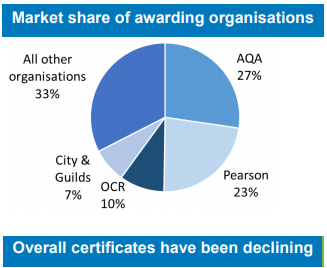 Maths remained the subject with the most certificates in 2016-17, though numbers reduced slightly from 2015-16.

The number of certificates awarded in GCSE science qualifications dropped in 2016-17. Ofqual said this is due to qualification reform, as those students who would have previously taken GCSE science at the end of year 10 and GCSE additional science at the end of year 11 will now be taking the new GCSE 9 to 1 in combined science, a double award available in 2018.

The drop is down to the decoupling of AS-levels from A-levels. AS-levels now no longer count towards a final A-level grade, so there is less incentive for pupils to take them.

Schools Week has previously revealed how decoupling AS has caused huge problems for univeristies. The University of Cambridge, for example, said it was “forced” to reintroduce entry tests because it could no longer use AS scores to offer places.

AQA had the largest market share for both AS and A-level certificates in 2016-17, though it dropped from 47 per cent to 43 per cent at AS.