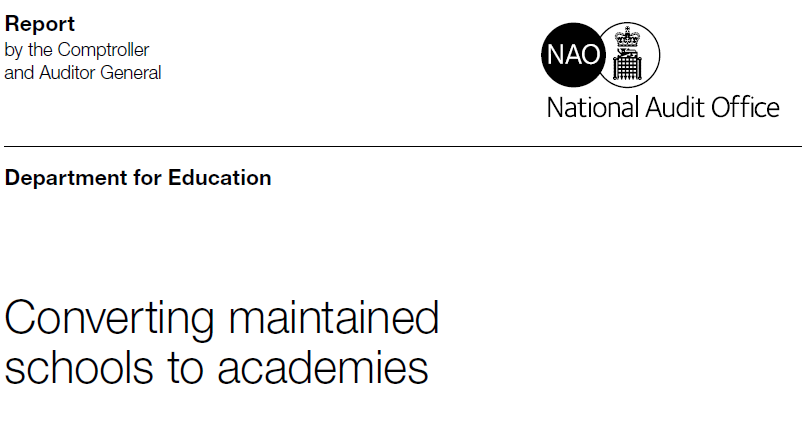 The system used by the government to convert local authority-maintained schools into academies is under National Audit Office scrutiny.

The government spending watchdog has published a report looking at the progress of the academies programme, in the context of recent moves to increase the number of academies across England.

In the March 2016 white paper ‘Educational Excellence Everywhere’, the Department for Education stated that “by the end of 2020, all remaining maintained schools will be academies or in the process of conversion”, and “local authorities will no longer maintain any schools”.

However, the NAO report points out that since the white paper, “the government has modified its ambition and no longer expects all schools to become academies”.

This change means “it is likely that there will continue to be a mix of academies and maintained schools for the foreseeable future”, but stressed that the DfE still has not formally set out its current policy for converting schools to academies or explored the broader implications for the school system.

The report looks at the current state of the system and what should be done going forward. Schools Week rounds up the key findings.

Since April 2016,  it has been the DfE’s policy to force LA-maintained schools rated ‘inadequate’ by Ofsted to convert to academies, and its aim to have them reopen as academies within nine months.

But the NAO found that of the 166 schools branded ‘inadequate’ between April 2016 and March 2017, 105, or 63 per cent, were still under council oversight nine months later.

The DfE already seems to be trying to improve on this, however. In the academies annual report and accounts for 2015 to 2016 the department revealed it would rate its regional schools commissioners on the number and percentage of failing maintained schools converting within nine months, making it one of their “key performance indicators”.

Before this, RSCs were assessed on the percentage of ‘inadequate’ maintained schools that had been issued with an academy order.

As of January, there are 7,472 academies in England, equivalent to 35 per cent of mainstream schools, and 2,700 academy trusts.

Of today’s academies, 6,996 schools converted to academy status from maintained schools, while 476 were set up as free schools.

An estimated 3.8 million pupils (47 per cent of the total number of pupils) were being taught in academies, as of January 2018.

Converting schools into academies has cost the government £745 million since 2010-11.

4. The future of academisation is ‘unclear’

With so many secondary schools already converted, and with the many primary schools unsuitable for conversion, it’s “unclear” how feasible further academisation of large numbers will be.

The vast majority of schools still supported by councils are primary schools, and their size and location often makes it more difficult to integrate them into multi-academy trusts. They also struggle on their own or in small groups, as Floreat Education recently found.

The NAO has identified a massive regional variation in the proportion of schools in different areas that are academies.

By January 2018, the proportion of schools that were academies had reached 93 per cent in the London Borough of Bromley, whereas only six per cent of schools in Lancashire, Lewisham and North Tyneside were academies.

Rates of conversion of maintained schools into academies tended to be lowest in the north and in London.

6. Some councils charge up to £20k in conversion fees

Some local authorities have started charging schools to convert to academies.

The organisation reviewed publicly available information on the matter, and found these fees range from £2,500 to £20,000 per school.

This is to cover things like staff costs and legal fees.

In January 2016 Schools Week reported that Staffordshire County Council was introducing a levy of £6,000 on schools that convert to become academies, and a year later in January 2017 we revealed that Schools in Norfolk had paid more than £500,000 in “conversion costs” to their local authority.