The ISC, a membership organisation for 1,326 private schools which counts Harrow, Eton, Westminster and Rugby among its members, has today published the results of its annual census.

Fees for private schools rose by 3.4 per cent on average between 2017 and 2018, having crept up by the same percentage the year before that too.

However, this is the lowest increase in fees since 1994.

Eighteen schools charge less than £2,000 and 22 charge more than £7,000 per term, “reflecting the diverse offering in ISC schools”, says the report.

2. Only 8% of pupils get means-tested help with fees

Only eight per cent of pupils received a means-tested bursary, which the ISC claims is worth around £400 million. This is four per cent more than last year.

Nearly 400 fewer pupils received means-tested assistance this year compared with last year. But the value of the financial assistance they received rose from £384 million in 2017 to £398 million this year.

“ISC schools appear to be providing larger bursaries but to fewer students, suggesting they are directing funds to those pupils most in need,” the ISC said.

Overall, a third of pupils receive some sort of reduction in fees when scholarships are included. The latter are not always means-tested. 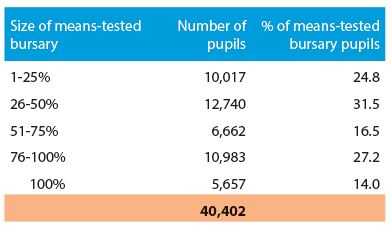 There are 1,137 private schools “involved in partnerships with state schools”, 86 per cent of ISC schools.

According to the report’s estimates, each of the 1,137 schools works with approximately 10 schools and 200 pupils.

“We can conclude that as many as 11,000 state-funded schools benefit from ISC school partnerships and as many as 225,000 state pupils.”

Nearly half of A-level entries at ISC private schools are met with A* and A grades, nearly double the national figure.

About 60 per cent of GCSE and iGCSE entries got A* and A grades, which is more than three times the national average.

However, half of ISC private schools are academically selective, a much higher proportion than state schools.

5. Half of pupils go to Russell Group universities

Ninety-one per cent of ISC pupils went on to higher education and 54 per cent continued to a Russell Group university.

Five per cent of ISC pupils went to either Oxford or Cambridge.

6. Teaching assistants are scarce – but there are few SEND pupils

Full-time teaching assistants make up 13 per cent of classroom staff, compared to 37 per cent in the state sector.

However, ISC schools barely have any pupils with a statement for special educational needs.

Just four per cent of their pupils are statemented or have Education Health and Care Plans, compared to 14.4 per cent in the state sector.

Overall, 15 per cent of private school pupils have a special educational need, when those without formal statements are also included.

Of those with SEND in private schools, 61 per cent have a specific learning difficulty such as dylsexia or dyspraxia.

The pupil-teacher ratio at ISC schools is 9:1. The ratio in state schools is 18:1.