Primary school aged children had the second highest levels of Covid-19 infection in early February, according to the latest round of a randomised testing programme.

Imperial College’s Real-time Assessment of Community Transmission, or “REACT” programme, has been tracking infection rates throughout the pandemic.

The latest round of testing, carried out between February 4 and 13, found that although the prevalence of Covid-19 fell across all age groups, it was highest among 18 to 24 year olds (0.89 per cent) and among children aged 5 to 12 years old (0.86 per cent).

This is compared to a prevalence of 0.51 per cent in the wider community in England, which is down more than two thirds since the last study in January, when 1.57 per cent tested positive.

It comes as school leaders await news of the government’s plans for reopening schools more widely.

They have been closed to all but the most vulnerable pupils and children of key workers since January 5, but attendance at primary schools has gradually been increasing, reaching 24 per cent last week.

Prime minister Boris Johnson has said he wants to see pupils return to schools from March 8, and has promised to set out a “roadmap” out of the latest lockdown on Monday.

It is not yet known whether all pupils will return on March 8, but it has been reported that a staggered approach for secondary pupils could be used to facilitate the mass testing of returning children.

The Telegraph reported today that families of secondary school pupils will then be asked to administer twice-weekly lateral flow tests at home.

But the Guardian has reported that Johnson favours a “big bang” return, which would involve all pupils going back to school on the same day.

Dr Mary Bousted, joint general secretary of the National Education Union, said such an approach would be a “high political risk for Boris Johnson”.

“Safe and sustainable school reopening is vitally important for pupils, parents and the wider community, so it is essential that it is done properly,” she told Schools Week.

“Phasing of year groups gives the time for the effect on the ‘R’ rate to be assessed, and the effects of the government’s safety mitigations to be examined and altered if needs be.”

In the latest REACT study, 348 of the 85,473 swabs collected between February 4 and 13, were positive. The report’s authors said that despite a “strong decline” in prevalence, it remains high, similar to levels seen in September. 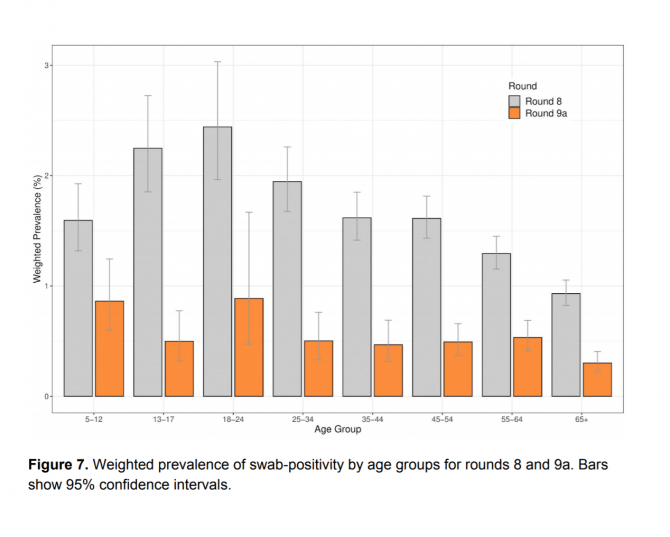 The number of Covid-19 cases in hospital is still higher than at the peak of the first wave in April last year.

For 13 to 17 year olds, prevalence last month was 2.25 per cent, making them the second-highest hit group at the time. But the rate dropped to 0.5 per cent this month.

The report warns that the easing of social distancing when transitioning out of lockdown need to be closely monitored to avoid a resurgence in infections and “renewed pressure on health services”.

The Guardian has also reported that the government plans to launch a PR campaign later this month to build up parents’ confidence ahead of schools’ reopening.

The Department for Education said it regularly reviews the scientific and medical evidence and advice to make sure the safety measures and testing facilities in place in education are guided by the most up-to-date understanding.