Today’s publication of the OECD’s international education league tables are likely to generate excited headlines, but the reality is that the results reveal some worrying trends, writes Joshua Fullard

Published today, figures from the Programme for International Student Assessment (PISA) show that, for the first time, students in the United Kingdom are performing significantly better than the OECD average in all three of reading, mathematics and science. The results put the UK’s educational performance in these subjects on a par with nations like Australia, Germany, Sweden, and the United States, but still some way behind students from China and Singapore.

PISA will be familiar to those who follow education debates as an international benchmark for the performance of UK students that is entirely independent of government. Every three years, it tests and compares the skills of 15-year-old students in reading, maths, and science across 70 countries. As the chart below from the OECD shows, the UK typically achieves about the average in reading and maths, while doing well in science.

The 2018 headline measures show an improvement in reading and maths, but also a continuation of a downward trend in science. However, the OECD’s own figures suggest that the change is slow and gradual. For example, the disappointing score in science in 2018 cannot be statistically distinguished from the scores in 2015, 2012, or 2009. Whatever some might say, it does not appear to be a story of transformative policy effects. 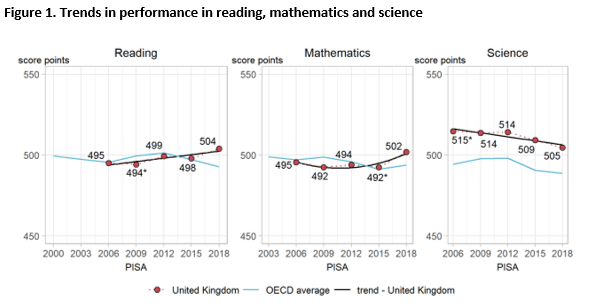 More positively, this attainment gap within the UK has fallen by 15% since 2009 and is smaller than the average gap across the OECD. However, the Education Policy Institute’s own annual report found that this trend has slowed in recent years and, in 2018, the gap grew slightly. That should cause the next government to reflect on where they choose to spend the additional funding all major parties have promised to put towards education after the election.

Although this is lower than the OECD averages of 34 per cent and 18 per cent respectively, this still suggests that the impact of policymakers’ failure to meet teacher recruitment targets has been felt most acutely by students from disadvantaged backgrounds.

Outside of the family unit, teachers are the most important adults in young people’s lives. They affect students’ educational attainment, future employment chances, and social development, so the fact that problems with teacher supply are far more pronounced in more disadvantaged schools could well contribute to the significant attainment gap.

These results neither justify wholesale reform nor provide a full vindication of the country’s policy direction. The headline results may be moderately positive for the UK but, beneath the surface, there are signs that progress is not being shared by all students. It is reassuring that the gap has closed somewhat over the past decade, but the continued disparity means there is certainly no room for complacency.