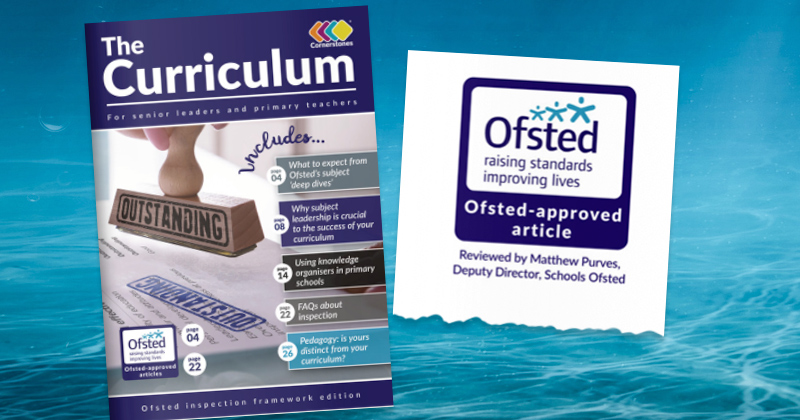 A curriculum provider has insisted a senior Ofsted official “approved” articles in its promotional magazine that featured alongside the Ofsted logo – despite the watchdog claiming it doesn’t approve “commercial products”.

The front page bears the schools watchdog’s logo with the words ‘Ofsted-approved articles’ for two pieces – ‘What to expect from Ofsted’s subject ‘deep dives’’ and ‘FAQs about inspection’.

Inside the magazine, the two articles are said to have been “reviewed” by an Ofsted director.

The watchdog has strict rules around the use of its logo and has even previously threatened a training provider with legal action over misuse of its badge.

An Ofsted spokesperson told Schools Week: “We were asked to fact-check some content for Cornerstones and we did so in the interests of accuracy. We do not ‘approve’ any commercial products.”

Cornerstones Education declined to comment. But its founder, former headteacher Simon Hickton, said on Twitter last night that the articles “were approved through extensive correspondence with Ofsted”.

He later added the “Ofsted-approved articles” badge only appeared on those “Ofsted had checked through and approved for content and accuracy. We’d never ask nor expect Ofsted to approve a product.”

Ofsted refused to provide any further comment when asked specifically whether they gave the firm permission to use its logo or the ‘Ofsted-approved article’ tag.

Within the magazine, it is claimed two articles were “reviewed by Matthew Purves, deputy director, Schools Ofsted”. The claim features below the Ofsted logo and “Ofsted-approved article” stamp.

Purves was one of the main architects of the watchdog’s new curriculum-focused framework. It was announced last month he would be joining the Academies Enterprise Trust (AET) as director of education services.

According to guidelines on Ofsted’s website, the inspectorate will “rarely give permission for our main logo to be used by third parties… The presence of the main Ofsted logo or name on any other website should not be taken as endorsement of any kind by us.”

After a front page of the magazine was posted on Twitter last night, some in the sector challenged whether Ofsted should be granting some commercial companies use of their logo alongside an “Ofsted approved” tag which could generate extra sales.

The row comes as schools scramble to update their curriculums to meet requirements under the new framework. On its website, Cornerstones states a curriculum package for an average-sized school costs under £4,000.

Schools Week also revealed last year how few academies given government funding to develop their curriculum had ruled out selling their resources once the pilot finished.

It’s also not the first time there’s been confusion over the use of Ofsted logos.

In 2016, Schools Week also revealed hundreds of schools were falling foul of rules over unauthorised use of the Ofsted logo to advertise a ‘good’ rating.

The watchdog only allowed institutions rated as ‘outstanding’ to display such a logo and had warned any other use was breaking Crown copyright law.

However, just seven months after vowing to crack down on schools using bogus logos, Ofsted launched a new ‘good’ logo for schools with the grade two rating to display on their websites and other advertising.