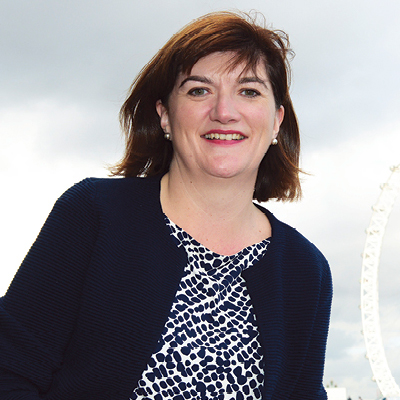 Every education secretary has a story of the day they were appointed.

Summoned from a symposium at the Treasury (where she was financial secretary), she was told the prime minister wanted to see her in ten minutes’ time.

“I can be there in about ten,” she said.

At the time it was unthinkable that Michael Gove, who held the position for more than four years, would be toppled. But as she hurried to Downing Street her husband, Jonathan, texted to say Cameron’s friend had been sacked. “That’s interesting,” she remembers thinking.

Her overriding memory of walking up to No 10 was a fear of tripping. “You’re aware that you’ve got all the eyes of the media on you,” she says. And then, in the door, an offer of coffee, and an X Factor moment in which the prime minister announces, “I want you to become… [LONG PAUSE]… the education secretary.”

Two years later, and she too is sacked. In her first major print interview since then, we are in her office in parliament where she has a fetching magenta radio – a 44th birthday present from Jonathan, the week before.

It has been a tricky month. The first Conservative MP to speak publicly and loudly about concerns over grammar schools, she has also continued to be vehemently in favour of staying in the EU, against the grain of the government’s Brexit bent.

She is also disappointed that Education Excellence Everywhere – the 128-page plan for education policy announced by her team earlier this year – has essentially been scrapped in favour of a six-page consultation on greater selection. At an international education ministers’ meeting in Japan, May 2014

Yet, critics say it is her own fault. Weak in standing up for the profession, she was cast as a poor leader who u-turned when the going got rough over her plan to make every school an academy and who signed off the first “satellite” expansion of a grammar school to a site several miles away, thereby opening the door for Theresa May’s selection plans.

But spend any time with her and you will know that she is steelier than she sometimes appears. She gives a robust defence of the charges.

On grammars, she says she pored over the decision to ensure it was legally correct. “I’m a former lawyer so I know what the value of precedent is,” she says, “We had a manifesto commitment to expand good schools, including grammars… but I think the expansion of one selective school in an area that already has selective schools is very different from saying we will have more new schools across the system.

“We are on the verge of seeing real excellence in our education. We see it already. And to throw something else into the mix… as I said at the party conference, government departments only have so much bandwith to deliver reforms.” Pressed on whether she would rebel in a vote on selection, she says she “won’t rule it out” and, given the grief she was given over her all-academy plan from backbenchers, she feels it is fair, now that she sits among them, to protest when unhappy about policy.

On the u-turn, she admits it was a difficult day and says she believes all schools should still become academies. The idea contradicts her first speech given at Conservative party conference as education secretary. At the time, she said “the name on the school” didn’t matter as much as what happened inside. What changed her mind?

“As I visited more and more schools, I could see that those that were academies, were… there was a freedom, and it was a freedom to innovate.

I do believe in schools becoming academies.

“I could see that was unleashing a real desire to do things and do them well across the system. So that’s why I think we made the commitment manifesto about the failing and the coasting schools. Then I started being asked everywhere, ‘You do want us to become an academy, don’t you?’. And I would say ‘Yes I do’ because I think that is what unleashes the innovation.”

Putting a deadline of 2022 on schools to convert was, she feels, the nail in the coffin.

“We were at risk of losing what was overall the right direction of travel, by people very much focusing on the date and not asking the right questions on what’s right for our school at this stage.

“It was disappointing… because I do believe in schools becoming academies.

“But that goes with the territory of being secretary of state. You have to develop a tough skin but you have to listen to people whose opinions you value most.”

So whose opinions does she value most? She gives a non-committal answer. In office she spent time “working out the motivation” of individuals and deciding who was genuinely trying to tackle a problem versus being difficult. It’s less blatant than Michael Gove’s “enemies of promise” but there’s a sense that in-groups were established. Returning to grammars, we discuss the government’s encouragement for multi-academy trusts to move children around their school sites based on ability once they have been enrolled. Doing so neatly avoids the ban on selection by ability, but enables grammar-style school “sites”.

She shoots the bored disbelieving look of a headteacher who has caught a pupil with his phone out. Again. If the expression were words, it would be “Oh please”.

She says the reality is that children don’t move once they are in a school, although she does wonder how schools will deal with rising or falling numbers in classes. She then rattles off other issues – including funding fluctuations and the cost and practicalities of transport.

In recent weeks an education department decision, made during her tenure, to gather data on pupils’ nationality and birthplace has made the headlines because of fears that the information will be used to check on children’s immigration status.

Though cagey about how the decision came about, she says “there was talk” about the data being used for immigration purposes when the decision was made. However, the education department has said this will not happen and has created a memorandum of understanding with the Home Office to guard against it.

She defends the concept of asking for more nationality data, though.

“I think the government is right… we kept being asked questions about the impact of immigration on education, and it formed part of the referendum campaign because of all the pressure on places, allegedly. So we do need to know a bit more information about nationality.” So what does life hold next? She is writing a book, she says, about character education – a topic she enthused about during her time in office and one that she wants to see continued as a theme by the government. And she has also had new additions at home: two cats, Merlot and Shiraz. (She is at pains to explain she didn’t name them.)

The day she lost her Cabinet post, her husband tweeted that he had lost a bet and cats would now be bought. Morgan explains it was actually a deal with her son who had asked for a dog before the last general election. Told they could only get one “if mummy lost her seat”, he immediately began canvassing family and friends to vote Labour. Crushed when she was re-elected, they said that if she was reshuffled away from Cabinet, they could get cats.

It’s an unusually long-game for an eight-year-old, but then both his parents are in politics (Morgan’s husband is a councillor in Loughborough) and if close colleagues of his mum are to be believed, she certainly doesn’t see her current turn on the backbenches as the end of her political career.

Although she didn’t manage to muster enough signatures to run for leader of the country this time, I wouldn’t bet against her trying in the future.

North and South by Elizabeth Gaskell; it reminds me of my sixth form

As little as possible!

Would you get a tattoo?

No. I’m not keen on needles

Cereal if I’m being good. A bacon sandwich if I’m not.

What was the most memorable party you attended as a child?

Roller-skating at Thorpe Park in Surrey