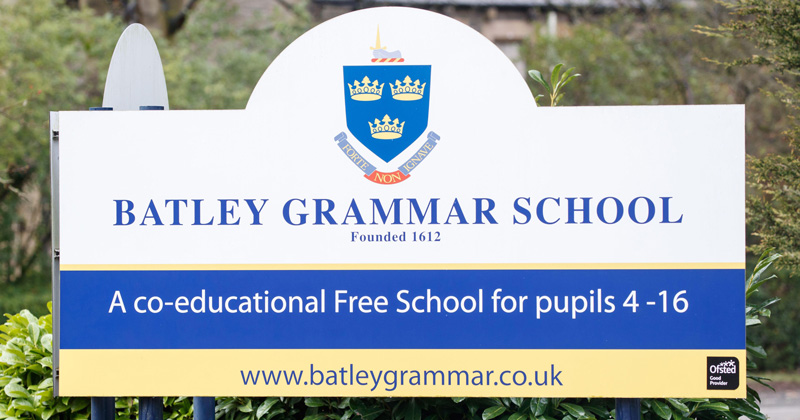 A fundraising campaign for the teacher at the centre of the Muhammad cartoon row is being led by an activist accused of stirring up local ethnic tensions.

It comes as a petition demanding the teacher’s reinstatement reached almost 70,000 signatures.

The staff member’s use of caricatures of the prophet in class sparked protests outside Batley Grammar School in West Yorkshire, thrusting it into the middle of a wider row over religion and free speech.

The school has now ordered an independent investigation into its curriculum after immediately suspending the teacher and apologising “unequivocally” over the materials used in RE lessons. The teacher involved is reported to fear for his life after death threats forced him into hiding.

An online fundraising page to help the teacher fight for his “job, reputation and security” secured more than £5,600 in donations within a day of its launch on Wednesday.

Creator Paul Halloran called it the “official fundraiser,” and said he was a family friend who had been asked to set it up.

But Halloran’s involvement in past local community tensions may risk further politicising divides over the issue.

Standing as a candidate in the 2019 local elections, Halloran faced claims from opponents across the political spectrum that he was stirring up ethnic divisions.

Halloran came third in the Barley West ward for the Heavy Woollen District independent party, whose only other local candidate Aleks Lukic was a former UKIP candidate.

Lukics led a controversial campaign to stop non-stunned halal meat being served in schools, with Halloran demanding the council reveal which schools did so.

Conservative leader David Hall agreed all meat should be pre-stunned to avoid animal cruelty, but condemned “those who would try to stir up community tensions” over the issue.

Halloran has also criticised the term “Islamophobia,” saying all racism should be called out. “I don’t see a lot in the Muslim community commenting on grooming gangs and terrorism….Let’s not invent a word that will stop us debating those things,” he reportedly said, according to the Press local newspaper. He denied accusations of racism.

But Halloran told Schools Week he “wholeheartedly” rejected ‘far-right’ labels, calling them “nonsense” promoted by his political opponents to discredit him. He said he was a respected local man who belonged to no political party, and had friends of “all cultures and religions.”

But he said he remained concerned “the word ‘Islamophobic’ is used at time to stifle reasoned and respectful debate.”

Footage of protests outside Batley Grammar’s gates quickly went viral, catapulting the area into the headlines only a few years after the murder of local Labour MP Jo Cox by a far-right extremist.

Demonstrators’ anger over depictions of Muhammad, reportedly caricatures from French satirical magazine Charlie Hebdo, and the school’s apology for “inappropriate” RE materials quickly sparked a backlash against the backlash.

Many appealed for calm but the row sparked not only fierce rows over blasphemy, schooling, free speech and multiculturalism but also reported death threats. Conservative peer Sayeeda Warsi warned debate had been “hijacked by extremists on both sides.”

The DfE swiftly called the protests and threats “completely unacceptable,” and defended the inclusion of controversial curriculum materials. The teacher involved is reported to have been teaching about blasphemy.

The school switched to remote learning amid the protests. The independent investigation will review the “context in which the materials [which caused offence] were used, and to make recommendations in relation to the Religious Studies curriculum so that the appropriate lessons can be learned and action taken, where necessary”.

An independent investigation panel will be appointed over the next fortnight, with the probe set to begin on April 12 and report “towards the end of May.”