The government will today finally publish its evaluation on the school resource management adviser pilot. Schools Week has been closely following the scheme, where the government pays to send school business experts into trusts to help them find savings.

We’ve revealed the alarming advice in some reports, how schools wanting repairs cash now have to agree to visits and have had money withheld for not signing up.

The government has been promising to publish its evaluation for some time. We’ve managed to get a sneak peak – here’s what we found.

1. Most of savings from ‘optimal deployment’ of staff

Academies minister Lord Agnew made big claims about his advisers finding £35 million of potential savings following their visits to 72 schools or trusts under the trial. Agnew described these as “essentially misdirected resources” (as we revealed last year, that’s somewhat up for debate).

Anyway, the report shows most of the savings (£19.6 million, or 56 per cent) related to the “optimal deployment of teaching and leadership staff”. The next largest chunk of recommendations was £3.1 million on revenue generation opportunities, while £2.8 million of savings related to education support staff.

Overall, 70 per cent of savings related to staff costs. Most of these were down to the integrated curriculum financial planning part of reviews, which look at pupil teacher ratios, average teacher costs, average class size and teacher contact ratio.

2. Just 16% of savings have actually been made

But – how much of these savings have actually materialised? Of the 54 trusts able to provide information*, just 24 had actually realised savings, totalling £4.9 million.

That’s just 16 per cent of the £31.24 million of potential savings found by advisers.

The largest chunk of this was £2.9 million on “optimal deployment of teaching and leadership staff” and £1.1 million on education support staff.

However, the 54 trusts said they are predicting to make future savings of £10 million over the next three years. If all these savings were made, it would still amount to only 48 per cent of the value of opportunities found by advisers.

A change of circumstances was said to be the main reason why savings weren’t taken up – for instance, joining a multi-academy trust didn’t happen, or the school had an increase in pupils. Only trusts in deficit must implement the recommendations. 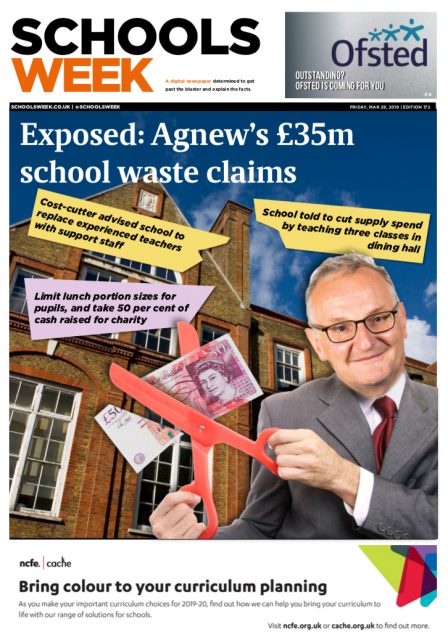 The report also stated anecdotal evidence that trusts “exploited natural turnover of staff”, or recruited less, rather than make redundancies.

Where money is saved, its either reinvested back into teaching and learning, or used to increase reserves or reduce deficits, the report stated.

*11 trusts had either since closed, were in active intervention or had been rebrokered, while another six had reports that only included uncosted savings and one couldn’t provide the value of savings.

There were a couple of teething issues ironed out following the trial. For instance, some trusts didn’t understand the expectations on them during the visits, with a new briefing document for trusts produced. Some trusts also felt five days per visit wasn’t long enough, so there is now a mechanism to extend them.

In a small number of cases the adviser did not have a “full enough understanding” of curriculum financial planning, so discussions weren’t as “productive” as they could have been.

This was most notable where advisers with exclusively primary experience were deployed to secondary academy trusts. The supplier contracts have now been amended to ensure advisers are sent to schools that fit their specialisms.

4. … But leaders seemed to welcome visits

Overall, 94 per cent of trusts said their experience was good or very good, and every respondent said the advisers understood the context and challenges faced by the school.

However, just under two thirds said they agreed with and implemented some or all the recommendations. Meanwhile just 53 per cent said the adviser made recommendations that they hadn’t already been considered.

But – which seems quite concerning – responses were received from just 17 trusts! This equates to fewer than a quarter of the trusts in the trial.

The department faced criticism during an education select committee about whether the scheme was a good use of public money.

According to the report, the pilot cost £368,265. Solely looking at the current actual savings made by trusts (£4.9 million), that works out at £13 for every £1 spent on the scheme.

If you add on the amount that trusts think they will save in the future (which takes the total to £14.98m), then that shoots up to £41 in savings per every £1 spent.

6. Staff moved onto term-time contracts to save money

The report includes a couple of case studies. Chapeltown Academy, a free school sixth form in Sheffield, reduced its senior leadership team to save £120,000 and moved administration staff onto term-time only contracts (a reduction to 0.87 of the previous salary spend).

The savings were reinvested to increase classes for business, law and psychology, and recruit two new teachers in the latter subject. The school has also since been rated ‘good’.

The David Ross Education Trust made estimated savings of £2 million per year after implementing financial curriculum planning recommendations and moving to a standardised curriculum approach across all its schools (that includes a “standard approach” to key stage 4, similar timetable and defined subject structures and timings”).

The programme has now been fully rolled-out, and as of November – 136 advisers had been accredited, with the potential to recruit 220 (who could deliver up to 1,300 deployments).

There have been 357 further visits after the trial, with potential savings of £137.2 million apparently identified.

However, just £6.1 million of savings has actually been made so far (of the 64 trusts who have been asked). But, another £33 million is forecast to be realised over the next three years (an average of £515,000 per trust).

This apparently represents 115 per cent of the opportunities highlighted by advisers during the visits (however, the figure is massively skewed by one trust planning to sell unused land worth around £10 million. The trust isn’t named).

Overall, 77 per cent of individual recommendations are expected to be implemented.

8. Cost-cutter coming to a school near you?

The report makes it clear – the “department wants all schools to benefit” from the scheme. In his foreword, Agnew said the “benefits arising have convinced me that virtually all schools should be taking advantage of this approach to planning and managing their finances”.

He adds he “would like to see every school developing the disciplines involved in this pilot”, and the department “stand ready to support all schools with expertise and advice to get the greatest value”.

The Education and Skills Funding Agency is working with councils, too, to “understand how they help maintained schools to make the best of their resources”. Some advisers have already been dispatched to LA-schools that would “benefit the most”.