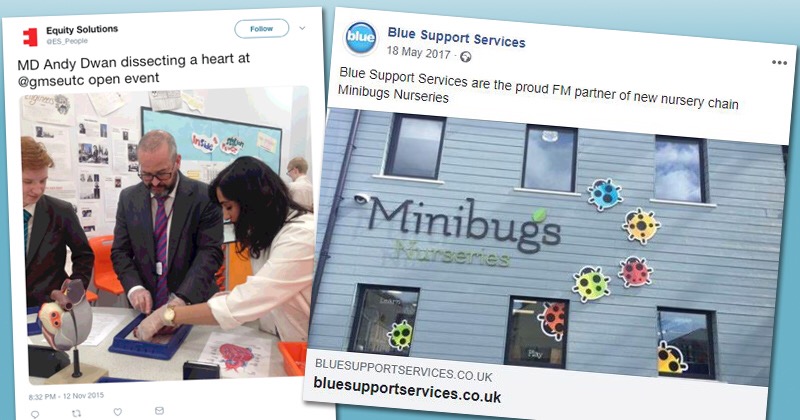 A failed academy trust gave the brother of its founder rent-free premises for ten years to run a private nursery on the site of one its schools.

The Adventure Learning Academy Trust (ALAT), the sister-trust of the crisis-hit Bright Tribe Trust, signed a deal to let a nursery company owned by Andrew Dwan, brother of the Bright Tribe founder Michael, to move into a building at the Liskeard Hillfort Primary School in Cornwall.

The deal was not recorded in the trust’s accounts where other related-party transactions are listed.

Both trusts are now being wound down and all of their schools rebrokered following financial and performance problems.

But the terms of the deal made two years ago under the previous leadership allows the 74-place Minibugs Nursery to continue to operate in rent-free premises until 2026, after which it will pay £5,000 a year.

The licence stipulates that the contract cannot be terminated until 2026 unless there has been a serious breach. The nursery is then entitled to two years’ notice before it has to quit the site.

This deals means that ALAT, which charged £5,000 annual rent to the previous occupiers of the site, and any new trust will have missed out on an estimated £50,000 in revenue by the time Minibugs begins to pay rent.

The disclosure comes as police and government investigations into Bright Tribe are still ongoing. New government-appointed trustees are also carrying out investigations, which are expected to be completed by Christmas.

They will also look at allegations made by the BBC’s Panorama that the trusts made repeated false claims for building and maintenance grants.

Michael Dwan stepped down as an academy sponsor from both trusts in September last year, expressing frustration with government scrutiny as concerns over the trusts’ financial dealings and the performance of its schools.

Both Michael and Andrew Dwan have denied any wrongdoing.

Asked whether there were plans to end the free lease now that Liskeard was being rebrokered to the Truro and Penwith Academies Trust, Andrew Dwan insisted the nursery’s licence to occupy the site “is a legal agreement and should be honoured”.

He told Schools Week that Minibugs Nurseries, which runs another nursery in Cornwall and one in Sheffield, spent more than £100,000 to refurbish the nursery.

“Minibugs is disappointed that there appears to be an attempt to allege wrongdoing of some sort, when the facts are that Minibugs invested substantial money and effort in establishing this nursery, which only enhances the opportunities for reception recruitment and an expansion of facilities at the school,” he said.

“We understand that other commercial operators were not interested in this premises, which required significant investment and refurbishment and where the previous operator had failed to attract viable children numbers.”

Andrew Dwan said he personally “appointed and paid for” the contractors to work on the nursery, but refused to comment on whether the works were undertaken by Blue Support Services, a facilities management company run by the brothers.

However, posts on the company’s Facebook page ranging from July 2016 until November 2017 boast of being the “proud partner” of Minibugs Nurseries and describe its workers as having been “busy bugs” at Liskeard.

Minibugs was officially incorporated as a company on November 15, 2015, with its 100 shares belonging to Blue Support Services.

But documents at Companies House show that on March 2, 2016, all the nursery’s shares transferred to Andrew Dwan.

The contract that allowed the free rental was signed off in September 2016 by Kathy Kirkham, the then Bright Tribe operating officer, but it’s not clear from public documents when the decision to award the contract was made.

However, minutes from a meeting of the joint ALAT and Bright Tribe trust board on March 17, 2016, involved an update from Kirkham, a former head of free schools at the DfE, on “nursery provision in Cornwall impacting on ALAT academies”.

The minutes read that directors noted “the Minibugs Liskeard Ofsted registration will be completed by April 2016 and a nursery manager has been recently appointed”.

The minutes list Michael Dwan as present and say “no potential conflicts of interests were declared relative to published agenda items”.

In relation to the shares, Andrew Dwan said this was the result of a “communication error on establishment of the Minibugs company and was corrected once realised” and he should have always owned the shares. He said the transfer took place “pre-trading before any lease agreement was entered into”.

A spokesperson for Michael Dwan insisted that he “took no part in any discussion or negotiation on behalf of the trust with Minibugs”, but would not confirm if he had been present in trust meetings that discussed the deal or that he had absented himself due to the conflict of interest.

A spokesperson for ALAT said Minibugs Nursery is operating within the school site under a licence to occupy agreed by the previous leadership of the trust. They added: “Liskeard Hillfort Primary is due to join a strong new trust next year, marking a fresh and exciting new start for the school.”

A Department for Education spokesperson said they will investigate any allegations of financial wrongdoing and take “quick and decisive action where substantiated”.