Three in ten GCSE results handed out this year were top grades, with the number of pupils scoring a flush of 9 grades having quadrupled since 2019.

But Ofqual found there was a “slight widening” of the “longstanding” results gap between students on free school meals and their better-off peers.

Today’s increase in top grades at GCSE is smaller than was seen in A-level results earlier this week. The proportion of grades at a ‘strong’ and ‘standard’ pass and above also increased, but less so than the highest grades.

Following the cancellation of exams this year, grades were issued based on teacher assessments, which have then been quality-assured by exam boards. Fewer than one per cent of grades were changed, however.

Rise in top grades, and 4 times more pupils get all 9s

Ofqual’s equalities analysis warns of a worsening of the disadvantage gap for some groups of pupils.

Looking at the probability of achieving a grade 7 or above, Ofqual found the gap between free school meals pupils and non-FSM pupils increased by 2.27 percentage points between 2019 and 2021.

Shadow schools minister Peter Kyle criticised the increase in the attainment gap, which he dubbed the “Williamson effect. This was not inevitable: Gavin Williamson should have supported schools better.”

But Geoff Barton, general secretary of the ASCL school leaders’ union, said it was “important to emphasise that the system of teacher assessment under which these pupils have been assessed is different from public exams and is therefore not directly comparable”.

“The GCSE grades awarded to these young people are a fair and accurate reflection of their performance under the robust system used this year which will allow them to progress to post-16 courses and apprenticeships in the normal way,” he added.

Across all ages in England, the biggest absolute increases in top grades for independent schools and free schools.

GCSE grades awarded to these young people are a fair and accurate reflection of their performance.

As with A-levels earlier this week, there were also differences in the increases in top grades depending on region.

At grade 7 and above, the greatest increase was in London, while the smallest was in the East Midlands and Yorkshire and the Humber. 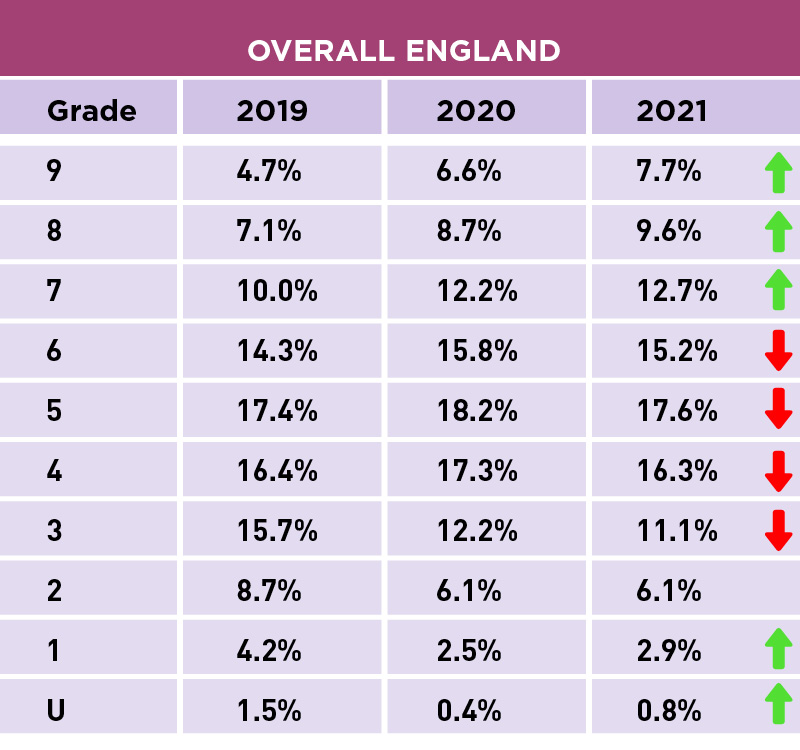 Education secretary Gavin Williamson said students should “feel proud of their achievements and will now be looking forward to taking their next steps”.

“I am also hugely grateful to teachers and school leaders for their hard work to ensure students get the grades they deserve and need to progress to the next stage of their lives.”