GCSE results are out this morning – here’s your usual handy Schools Week round up of the key trends.

Note: all the findings below are based on figures for 16-year-olds in England only, unless stated otherwise.

Historically we have always highlighted the grade 5 and above pass rate (considered a “strong” pass), because it’s how schools are judged in league tables, despite grade 4 being a ‘standard’ pass (the equivalent of a C in old money).

While there’s no league tables again this year, they are coming back in 2021-22 – so we thought we’d persist.

As widely expected this year, top grades have risen slightly (and far less that the inflation we saw with A-levels on Tuesday).

The proportion of 7 or above grades rose from 27.5 per cent last year, to 30 per cent this year – a rise of 2.5 percentage points.

Looking at the actual numbers of grades – it means nearly 145,000 more 7 or above results were issued this year (a rise of 11 per cent).

3. Small rises across the board in maths …

The outlook in English is a bit different. For instance, the proportion of 7 grades and above is up by much more: 2.8 percentage points (from 23.5 per cent last year to 26.3 per cent this year).

Grade 4s and above remained stable at 80.9 per cent, up slightly from 80.2 per cent last year. But this followed a nearly 10 percentage point increase the previous year.

5. … and not huge movement in science grades

Meanwhile, double award science saw a 1.8 percentage point increase in grades 7 and above (up from 10.4 per cent last year to 12.2 per cent this year).

Like both English and maths, the proportion of 4 grades and above only inched up (from 64.4 per cent last year to 64.7 per cent this year).

This year, 3,606 children received straight 9s in 7 or more subjects.

Of those scoring the top grades this year, 64% were girls and 36% were boys (a similar split to previous years). There were 16 pupils who took 12 GCSEs and got 9s in all of them! (see table below). 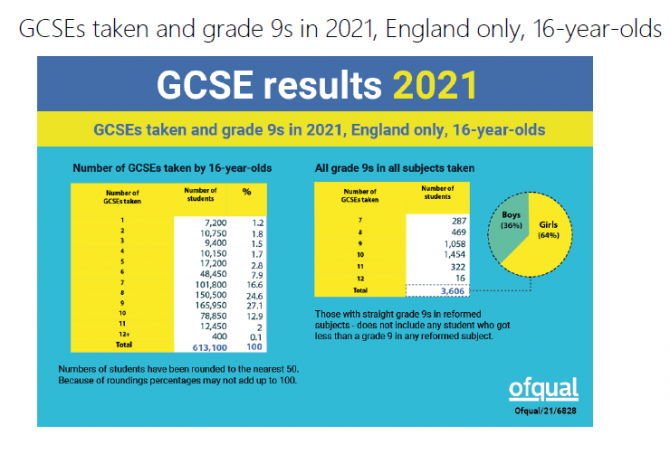 For subjects with more than 100,000 entries, Spanish tops the charts for the largest increase in entries (again).

Physics, chemistry and geography were the only other subjects to see a 4 per cent or more rise. For entries with fewer than 100,000 entries, citizenship, food prep, social sciences and other MFL had the largest rises.

Among the larger courses, religious studies saw another drop in entries – down by 1.5 per cent this year.

Of those below 100,000 entries, statistics saw a whopping 23 per cent fall. Engineering had 10.7 per cent fewer entries, while German was down 9.3 per cent.