GCSE results are out this morning – here’s your usual handy Schools Week round up of the key trends.

One thing to note: From a Schools Week perspective, the most useful data for our readers is the England 16-year-olds data.

So, unless stated, the stats below will be solely be based on 16-year-olds in England.

This is important because schools are judged in league tables on the 5-and-above grade rate (considered a strong pass), even though the standard pass is a grade 4 (the equivalent of a C in old money).

Overall, the 4/C pass rate for both the reformed 9 to 1 subjects and the unreformed subjects that are still graded A* to U was 69.9 per cent – up slightly on last year (69.2 per cent).

GCSE entries across the UK remained stable (there was a 1.4 per cent rise in entries, but the 16-year-old population increased by 1.5 per cent).

2. Top grades in English have dropped a teeny bit …

However the proportion of 4/C and above grades dished out has risen, from 70.2 per cent last year to 70.5 per cent.

Entries into English are also up 4.4 per cent.

More top grades have been awarded this year in maths. The proportion of 7/A or above grades has risen 0.4 percentage points (from 20 per cent last year to 20.4 per cent).

4. And so is science

5. Girls lead the way in the straights 9s

This year, 837 children received straight 9s in 7 or more subjects (This was 732 pupils last year, but Ofqual says you can’t compare the two figures as more kids are now taking reformed subjects.

JCQ hasn’t provided us with data on individual grades for 16-year-olds in England only – grr – so we’ve had to make do with all ages across England. 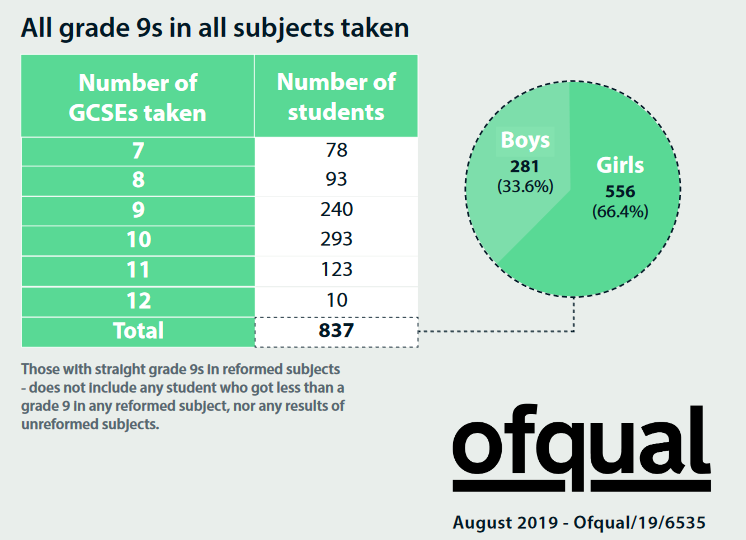 6. Revival for the arts, but religious studies stagnates

The top ten subjects remained the same this year, with double science leading the way (15.1 per cent of all entries) followed by maths (14 per cent) and English (13.8 per cent).*

What’s more interesting is the subjects with the largest increases and decreases in popularity.

Art and design subjects have had somewhat of a revival with a near 10 per cent boost in entries, followed by Spanish (which follows a rise in A-levels this year, too), and history (up 7.1 per cent).

Of the courses with fewer than 100,000 entries, statistics saw the largest rise (up a whopping 54.4 per cent). Another interesting one is computing – while it had a 7.2 per cent increase this year, it was still only the ninth highest rise among entries of the smaller subjects (not sure if that’s a big enough rise to stem the issues we’ve extensively reported on).

Meanwhile, the only GCSE (with over 100,000 entries) to see a fall was religious studies (down 1.8 per cent), which carries on a decline from last year where the subject saw entries plunge by 10.1 per cent.

For the drops in the smaller courses – leisure and tourism was top (96.4 per cent fall), followed by hospitality and health and social care.

*These stats are UK-wide.

We’ll be providing further analysis throughout the day at Schools Week, so go and hang out with your pupils and we’ll get digging!