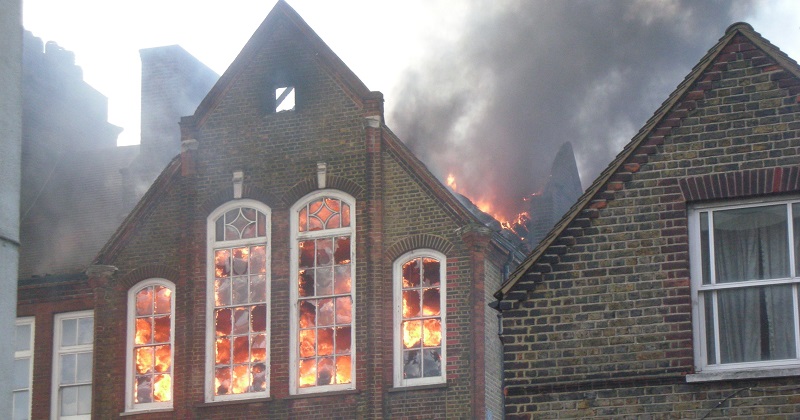 The number of fires in London schools has increased by a third in just one year, the London Fire Brigade has revealed, as it renewed calls for mandatory sprinkler systems in all new-build schools.

According to figures from the LFB, there were 90 fires in the capital’s preschools, nurseries, primary schools and secondary schools in 2017, up from 67 in 2016, and just two of the 90 schools had sprinkler systems fitted. Between January 2010 and December 2017 there were 707 fires in London schools, and just 14 of the schools affected had the fire-preventing sprinklers.

So far in 2018, there have been 47 fires at schools in London. Sprinklers had been fitted in just one of the affected schools.

London fire commissioner Dany Cotton criticised the government for failing to make sprinkler systems mandatory in new school builds, and said it was “staggering that such a simple safety measure is so easily omitted from the designs.”

“Millions of pounds are wasted every year repairing fire damage in London’s schools when sprinklers could have prevented the spread of a fire,” she added.

“This is not just about saving money. When a school is closed it disrupts a child’s education and affects parents by closing breakfast and after school clubs.”

The Fire Protection Association said the average cost of repairing the damage of large school fires increased from £330,000 per fire in 2009 to £2.8 million in 2014.

In Scotland and Wales, it is already a legal requirement for all new schools to be built with sprinkler systems installed. Last year, unions successfully campaigned to prevent the government from further weakening fire protection arrangements for schools by removing the “expectation” that sprinklers be fitted in new schools.

In 2007, the building bulletin 100: design for fire safety in schools guidance said all schools should have sprinklers apart from “a few low risk schools”. However, Schools Week revealed last June that the proportion of new schools being built with fire-preventing sprinklers has halved to just 35 per cent since 2010.

Figures released in February revealed that just 74 of the 260 schools rebuilt as part of phase one of the government’s priority school building programme have, or are planned to have, sprinklers fitted.

Later that month, the National Education Union and Fire Brigades Union accused the government of a “shockingly cavalier” attitude to fire safety after the announcement that Selsey Academy in West Sussex, which was almost completely destroyed by a fire in 2016, is set to be rebuilt without sprinklers because the original building did not have them.

Last July, schools minister Nick Gibb admitted the government does not know how many of the 376 free schools that have opened since 2010 have been built without sprinkler systems.