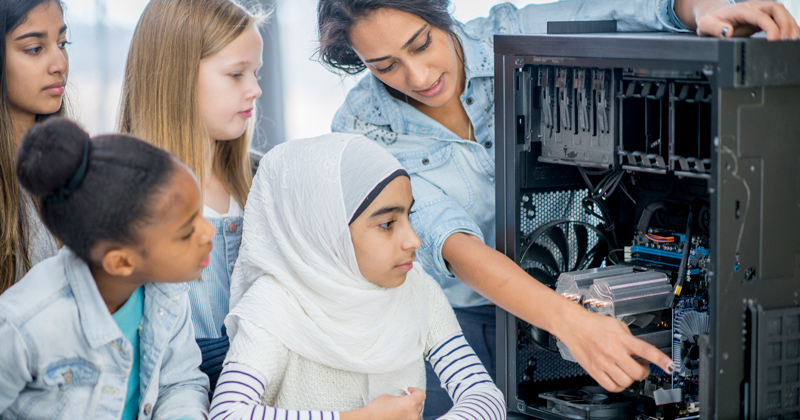 Ministers have been told to prioritise curriculum funding for schools that will develop resources showcasing women in STEM, after a study found not a single women is mentioned in the GCSE science curriculum.

A study by the charity found no mention of any women in the Department for Education’s ‘biology, chemistry and physics subject content’ or its ‘combined science: GCSE subject content’ – both of which were updated in 2019. They contained mentions of 14 male scientists or materials named after them.

The analysis also discovered of three double science GCSE specifications from major exam boards, only Rosalind Franklin and Mary Leakey are mentioned. This is compared with over 40 male scientists who are mentioned by name or have concepts and materials named after them.

Teach First has now called on the government to extend the 2019 curriculum fund, specifically targeted to develop resources to help schools include more women in STEM teaching.

The charity said distributing funding to all schools would “give easier access to high-quality materials that support the content of the national curriculum and showcase examples of successful women in STEM”. Currently, only certain schools can apply for funding.

They also want STEM teachers who are advocates of STEMinism to get a pay premium and roll-out schemes that reward schools for increasing inclusion in STEM subjects, as seen in the Gender Action Award.

According to Teach First a STEMinist is described as an advocate for more women in science, technology, engineering and maths roles that are too often dominated by men.

In 2018 the National Audit Office published a deep dive into STEM skills and found only a fifth of physics A-level pupils are girls.

While a previous Schools Week investigation revealed the £67 million scheme launched under David Cameron to upskill 15,000 teacher in maths and science is struggling to hit its targets. The government failed to fill a third of its teacher subject specialism training (TSST) courses in the last three years.

In the report, Teach First argues that breaking down these gender-stereotypes for girls is  an economic imperative for the country as a whole as only 12 per cent of engineers are female and just 13 per cent of STEM workers at management level are women.

A poll commissioned by the charity found only 49 per cent of British adults can name a female scientist, dead or alive.

A DfE spokesperson said:  “Last summer’s A Level results showed that more girls now do science subjects than boys for the first time ever and there are a growing ‎numbers of girls taking STEM subjects at A level.

“But we recognise there is more we can do, which is why we are building on that progress through the STEM ambassadors programme, creating a network of Maths Hubs and funding the Simulating Physics Network to attract and hone top talent and improve gender participation in schools.”