The National Audit Office has published a wide-ranging report on science, technology, engineering and maths skills. Here are some of the most important things for schools…

According to early research, a £67 million maths and physics teacher supply package put in place by the government is having a positive impact.

The scheme aims to recruit an additional 2,500 teachers and improve the skills of 15,000 non-specialist teachers in the subjects.

There has been positive feedback about schemes that provided extra CPD for teachers, such as the triple-science support programme, further maths support programme and science learning partnerships.

2. …but others are doing less well

A report by the NAO last year found that elements of the STEM teacher recruitment programme had been less successful.

The return to teaching pilot, for example, recruited 428 returning teachers, only around of its target of 810, and just 330 completed the training provided.

3. Only as fifth of physics A-level pupils are girls

Although the number of entries to A-level physics has reached a five-year high, the proportion of entries that are from girls remains stubbornly low. 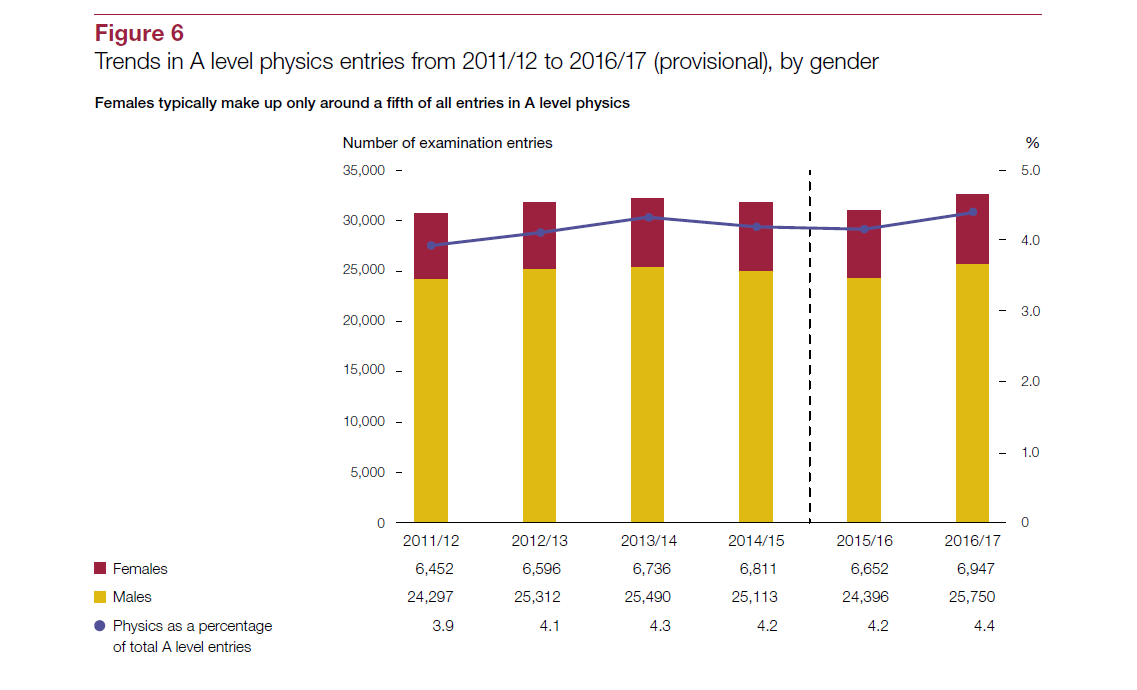 Across most STEM subjects, there is a “consistent gender participation gap”. In 2016-17, girls made up 42 per cent of all STEM A-level examination entries, including just 9.4 per cent of entries in computing, 21.2 per cent in physics and 39 per cent in maths.

However, girls made up 61.8 per cent of A-level biology entries.

4. UTCs have failed to establish their position

According to the NAO, many of the government’s flagship 14-to-19 institutions have “failed to establish their position in the educational landscape”, and as a result have “struggled to attract enough students”.

This is despite almost £200 million having been spent on setting up the colleges. You can read more on this here.

Among the “challenges” listed by the NAO as facing the growth of STEM training in England is the financial disincentive for schools to promote further education routes.

Because funding follows pupils, it is not in the best interests of schools to encourage children to leave early to pursue other options.

Other challenges include the “patchy” nature of careers advice and work experience.

Because responsibility for STEM is split between a number of government departments, those organisations face a “complex challenge to improve the quality of teaching and student take‑up in key STEM subjects”, the NAO warned.

Although some initiatives run by the Department for Education and the Department for Business, Energy and Industrial Strategy have had some positive results,
there “remains an urgent need for a shared vision of what they are trying to achieve and coordinated plans across government”.

“The absence of a precise understanding of the STEM skills problem means the efforts of DfE and BEIS are not well prioritised and a better targeted approach is needed to demonstrate value for money,” the NAO concluded.

7. The DfE needs to provide ‘clarity’ on its definitions of STEM

Research by the NAO found that the Department for Education uses different definitions of STEM, depending on the context.

Without clarity on the matter, meaningful comparisons of progress across different policy areas “will always be challenging”.