Schools are missing out on millions of pounds in pupil premium cash because their poorest children cannot afford British citizenship, Schools Week can exclusively reveal.

About 120,000 pupils in the UK are estimated not to have British citizenship despite many of them being born in the country. This is because their parents are not yet citizens and cannot afford the £1,012 fee slapped down by the government for a child’s citizenship application.

Now school leaders have warned their non-citizen status makes those families ineligible for income benefits and so the children cannot claim free school meals, upon which pupil premium money is based.

They may be very poor, but aren’t entitled

Tim Borton, academy partner at accountancy firm Bishop Fleming, noted that up to £156 million could be missing across the whole UK schools sector.

“It won’t be an equal amount across all schools, because it will depend how many pupils they have in this situation. But it’s quite a lot in total.”

Micon Metcalfe, chief operating officer of Langley Park Academies and a fellow of the Institute of School Business Leadership, added that most migrants without citizenship are not eligible for public funds, “hence [their children] receiving no pupil premium or free school meals”.

“They may be very poor, but aren’t entitled,” she said, explaining that schools will have to provide meals from their own budgets.

Last week, 100 school leaders wrote to the Home Office with civil society organisation Citizens UK demanding that the current sky-high fee for citizenship application stop increasing and instead be reduced to its actual cost of £350.

Unlike most other European countries, pupils born in Britain but whose parents were not formally settled in the country at the time of their birth are not considered British. The current cost is almost 10 times that of other countries with a similar policy such as France, Sweden, Belgium and Spain.

Analysis by immigration advice website Free Movement has also calculated that the Home Office made almost £100 million in profit from children registering as British citizens over the last five years. A fall in registrations in that time suggests high fees are preventing pupils from obtaining citizenship. 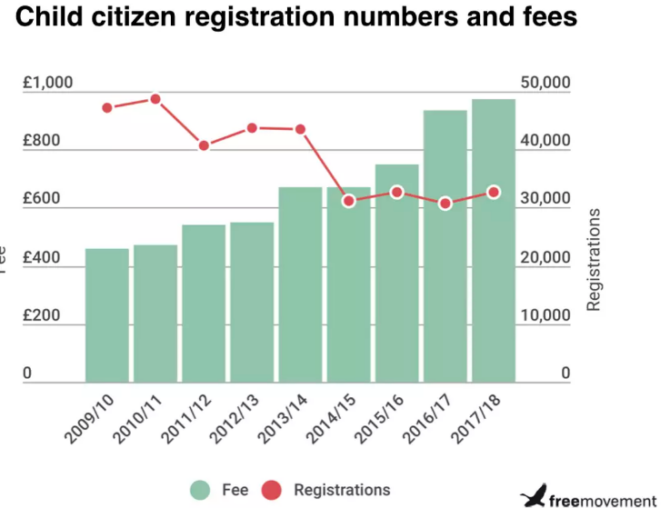 ‘We’re having to find extra money’

Schools Week spoke to Surrey Square primary school in south London, which currently has 45 pupils (10 per cent of its pupil population) who need to apply for citizenship.

“These are pupils with no recourse for pupil premium, we don’t get that money for them,” explained Fiona Carrick-Davies, the school’s family and community coordinator.

Over the last four to five years the cost of citizenship has become an increasing issue for parents.

“The cost is so high now, and it’s on families who are usually working, normally in low-paid jobs, in cleaning, care work, as kitchen staff or teaching assistants.

“Most of them try to afford the fee – they will borrow from friends, get into debt, or go without food or other things. The parents will sacrifice all for their children.”

But many pupils’ families are unable to afford the cost, said Carrick-Davies.

“We’ve got a pupil who has just left us in year 6 who hasn’t been able to apply for citizenship yet, because her mum can’t afford it, so she’s in secondary school without it now.”

In Southwark the council provides free school meals to all pupils at primary level but not beyond.

Pupils from nearby secondary schools “still grab a bagel” at the school’s breakfast club when they drop off younger siblings because otherwise they would not eat, she said.

Aside from feeding the pupils, Surrey Square has also provided clothes, air mattresses, food vouchers and paid for them to attend holiday schemes.

Sanoobar Patel, marketing manager at Leyton Sixth Form College in north London, told Schools Week that pupils find it “alarming” to discover they are not British citizens, adding to the “stress and anxiety” of exams or applying to student finance.

“Many of our pupils come from deprived backgrounds so raising more than £1,000 for the application is just not feasible.

“Some pupils have to consider taking a gap year to raise the funds themselves, or reconsider their university applications altogether.”

The biggest impact on pupils is psychological

Sebastien Chapleau, head at La Fountaine Academy in south London, said the cost of citizenship applications has been a big issue in the schools he’s worked at for the past decade.

The biggest impact on pupils is psychological, he said – “not being able to feel British when you were born in the country. Not being able to call your home country, home”.

Paul Whiteman, general secretary of school leaders’ union NAHT, warned that schools are being expected to “shoulder the additional financial burden” of supporting pupils with unclear citizenship status, “without the appropriate funding such as the pupil premium.”

But a spokesperson for the Home Office said the current fees “take into account the wider costs involved in running our border, immigration and citizenship system.”

By paying the fee for citizenship, “those who directly benefit, contribute to its funding.”