A Harris primary school held up by ministers as a shining example of academisation “overaided” pupils in their SATs, an investigation has concluded.

Pupils at Harris Academy Philip Lane in north London were given too much help in their English reading and maths reasoning SATs papers, the Standards and Testing Agency has decided.

Now year 6 pupils’ scores in those papers have been wiped and they will only receive scores for their grammar, punctuation and spelling tests.

A letter seen by Schools Week was sent to parents on Monday from Susan Head, the academy’s chair of governors, which describes the findings as “deeply regrettable and disappointing” and says the school is “determined to get to the bottom of what has happened.”

She says principal Emma Penzer wrote to parents before the summer holidays to say that SATs results had been delayed while the STA investigated an allegation that the academy had mishandled the tests.

The investigation’s findings are being taken “extremely seriously”, it continues, adding that responsibility lies with the academy and no pupil is at fault.

It was formerly called Downhills primary school before it was controversially forced by the government to become an academy in 2012.

In June 2015, Gibb invited Harris boss Dan Moynihan at a public bill committee to describe “the change in pupils’ life chances, as a consequence of Harris taking [the school] over.”

Moynihan responded that “the number of children reaaching secondary-ready standards in reading, writing and maths has improved dramatically.

“They are better prepared for secondary and will be successful as a result.”

In response to the letter revealed today, a Harris spokesperson told Schools Week the nullified scores will not adversely affect the pupils’ move to secondary school.

“Pupils have been given accurate teacher assessments and these have been provided to the secondary schools they are moving on to, along with their grammar, punctuation and spelling results.

“This will ensure their transition to secondary school is not affected.”

But the trust has launched its own investigation into the events and promises to take “the toughest action” in light of the findings.

“We were shocked and dismayed to hear of the over-aiding. As well as cooperating in full with the STA, we have arranged our own thorough investigation.

“This will begin in the autumn term and we will not hesitate to take the very toughest action wherever this is appropriate.”

A Department for Education spokesperson said: “Teachers and parents must have confidence in the integrity of the assessment system, which is why we take allegations such as this very seriously.

“Following an investigation by the Standards and Testing Agency, several key stage 2 papers were annulled.

“This will not, however, adversely affect any of the pupils as the school can provide teaching assessment data to show the pupils’ progress in these subjects.”

Here is the letter in full: 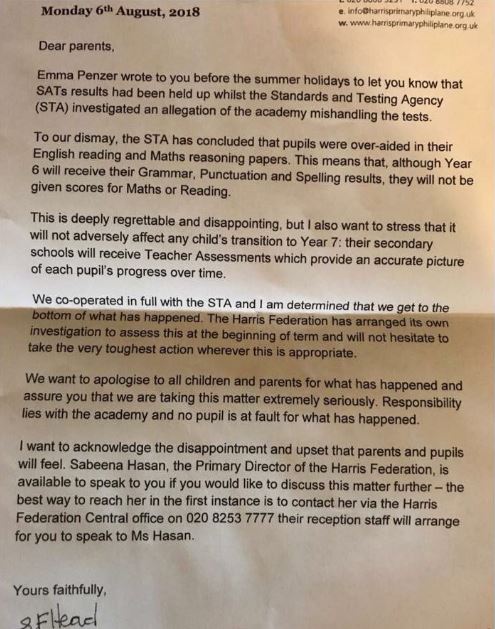