Government plans for a register of children not in school could put families off seeking help from local services, data privacy and human rights campaigners have warned.

The Counting Children Coalition has also questioned plans by ministers to amend their own schools bill this afternoon to give them the power to require councils to collect data on pupils’ protected characteristics, such as race, religion and sexual orientation.

The government announced plans for a register of children not in school in 2019, but the policy was not set in motion until this year.

The schools bill, which will continue its report stage in the House of Lords today, will create a legal duty for councils to maintain such a register, and a duty on parents to supply information for it.

The government says the register will “stop children dropping off the radar and becoming vulnerable to poor standards of education or risks to their safety and wellbeing”.

But a coalition of campaign groups, including Defend Digital Me, Liberty, Square Peg and the Victoria Climbié Foundation UK has written to education secretary James Cleverly, demanding the removal of the “dangerous new registration duties on parents” from the bill.

Their fears come after a damning audit report from the Information Commissioner’s Office in 2020, which ruled that the Department for Education broke data protection laws in the way it handles pupil data.

It also followed a botched attempt to collect pupils’ nationality and country of birth data following a widespread boycott of the collection.

The government was forced to admit after a lengthy freedom of information battle with Schools Week at the time that it had intended to share the data with the Home Office for immigration control purposes.

The data collection was abandoned in 2018 after schools refused to participate, and the data was finally deleted from the national pupil database last year.

But campaigners fear a repeat of the ordeal, and warned Cleverly that “fear of punitive overreach from other authorities, including the police accessing these records, will dissuade some families from seeking contact and support they receive today from local services including public health”.

Ministers have also announced plans to move to a system of e-registers for monitoring school attendance, and hand councils and schools a legal responsibility to “consider” fines for pupils absent for long periods and taking unauthorised holiday.

But the coalition warned that this “more rapid route to criminalisation for non-attendance” would wipe out “hard-won trust” between schools and parents of children with irregular attendance patterns because of long-term illness or additional needs.

“The Department for Education already holds a huge amount of data on children,” said Jen Persson, director of Defend Digital Me.

“The measures in this bill, along with the real-time national attendance tracking of millions of pupils the DfE has already begun without informing families, takes this to ever more worrying levels.”

In response to fears that the original schools bill would create “broad power” for the government to demand councils collect any information about children it sees fit, academies minister Baroness Barran will seek to amend the legislation this afternoon.

But her amendment, if passed, would give the government to require councils to collect data on pupils’ protected characteristics, “within the meaning of the Equality Act 2010”.

In a briefing for peers, seen by Schools Week, the coalition questioned the need for these powers, warning that collection of such data was “unnecessary at national level for non-direct care of children”.

“The local authorities and Department for Education should receive such data as statistics, not raw data attached to individual names so that they are unable to give away this highly sensitive data at identifying pupil level.”

In another amendment due to be discussed the afternoon, the government will attempt to reassure the public that “no information” from its new register will be published in a form which identifies a child or parent.

But the coalition warned that the bill still “leaves open for the local authority and/or DfE to copy and paste the model used for distribution of the personal confidential data of over 21 million people in the national pupil database”.

The DfE said last month it would only share data from the register “where it is lawful, secure and ethical to do so”.

“Any information shared with the department will also be collected and processed in line with GDPR and subject to a data protection regulations.” 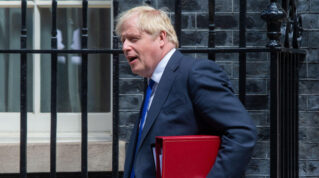