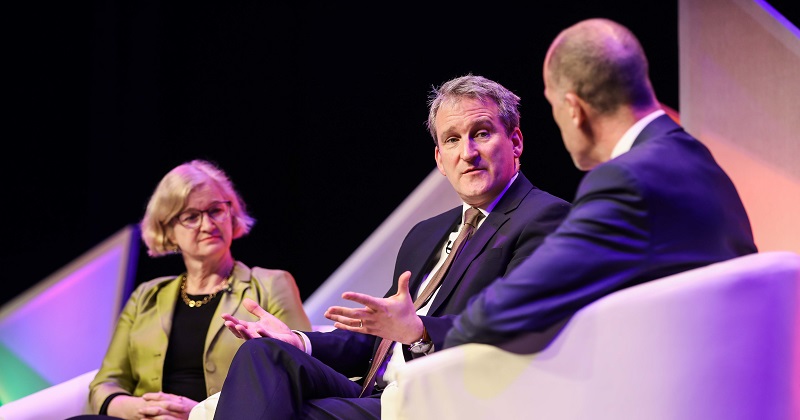 Hundreds of headteachers gathered in Birmingham last week for the annual conference of the Association of School and College Leaders.

The event hosted Damian Hinds’ first speech to the profession since he was appointed as education secretary, and keynotes from Amanda Spielman, the chief inspector of schools, and Lucy Powell, the former shadow education secretary.

Here, we round up what we learned from the event…

In a cosy chat with ASCL general secretary Geoff Barton after his speech, Hinds conceded that schools faced funding difficulties, and said it was “vital” for education to be “properly resourced”.

Although delegates responded positively to Hinds’ speech, there was unrest when the panel tried to move on from the funding issue, prompting warnings from Barton about leaders’ behaviour in the hall.

Despite the brief outburst, Hinds had an altogether more positive experience than his predecessor Justine Greening, who was heckled last year when she brought up the government’s now-defunct grammar schools plans.

Amanda Spielman told heads her organisation is keen to do its bit to reduce teacher workload, and gave a commitment to remove some of the things Ofsted does that “create workload”.

However, the chief inspector appears to be in two minds about how Ofsted can use its inspections to identify over-working of teachers.

In her speech, Spielman said she is “loathed” to commit Ofsted to judge schools on how they manage teacher workload, but has not ruled it out.

The president of Britain’s largest business lobbying organisation used his speech to the conference to attack the government’s “parade” of education reforms and its “fixation” on exams, and demand that a new education commission take control of the sector.

Paul Drechsler, the president of the Confederation of British Industry, warned that curriculum reform should be driven not just by the government, but by a group made up of education leaders, businesses, politicians, young people and parents.

Drechsler was one of dozens of business leaders who attended the conference as part of a drive by the union to work more closely with the corporate world.

4. The roles of RSCs, Ofsted and the ESFA will be ‘clarified’

The blurred lines between the duties of regional schools commissioners, Ofsted inspectors and government funding bosses continue to confound school leaders, and ministers seem to have clocked on.

Hinds told ASCL members on Saturday that he will make a statement to clarify the roles of the different levels of oversight and accountability currently operated by central government.

Geoff Barton told Schools Week he welcomed Hinds’ promise of clarity, and said leaders had found their “heads spinning in all directions” as a result of the blurring of the lines between official bodies.

Although well documented, Hinds’ support for selective education was not mentioned during his speech.

However, during a press conference on day one of the conference, ASCL’s leaders warned that funding pressures are forcing grammar school headteachers to consider increasing their pupil numbers to reach “economies of scale”.

Although plans to lift the ban on new grammar schools in England are unlikely to resurface, the education secretary has expressed his desire to see existing selective schools expand.

6. The government wants to ‘strip away’ unnecessary workload

Faced with a worsening teacher supply crisis, Hinds made a desperate plea for help from teaching unions in his speech to the ASCL annual conference.

The education secretary announced a strategy to “drive recruitment and boost retention of teachers”, which will involve working with the unions and other professional bodies to “devise ways of attracting, and keeping, the brightest and best graduates”.

Lucy Powell, the former shadow education secretary and a high-ranking member of the parliamentary education committee, represented Labour at the conference on Friday.

During her speech, Powell announced plans for an inquiry by Labour MPs into school improvement and accountability, which will attempt to “flesh out” the party’s education policies.

The Manchester Central MP warned during her speech that the “unchecked explosion” in academies has led to increasing problems with transparency, financial probity and accountability.

8. The new education secretary is trying to make friends

Hinds’ speech heaped praise on school leaders, calling teaching “one of the highest callings, the noblest of roles”, and highlighted “the hard work, the care, the imagination shown by teachers and leaders” during school visits he has made in his first two months in the job.

Appearing alongside Spielman and Barton, Hinds insisted that everyone is “on the same side”, and said “we all need to take collective ownership of the workload burden on schools”.

This burden “isn’t a problem with a quick fix”, Hinds said, acknowledging that government had played a role in creating extra workload with the “pace of change” over the past eight years.

Though light on policy proposals, Hinds’ speech did strike a conciliatory tone, but many heads will be wondering if he’ll put his money where his mouth is.

You can read the full text of the speech here.