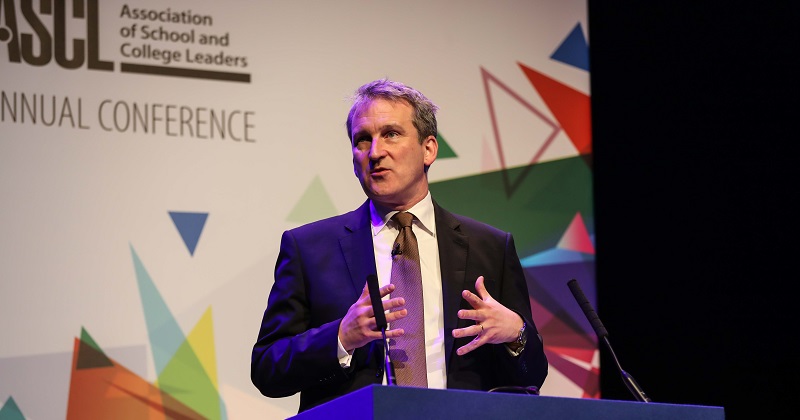 The new education secretary has admitted that school funding is “tight” and said it is “vital” for the education system to be “properly resourced”.

During an on-stage conversation with Ofsted chief inspector Amanda Spielman and ASCL general secretary Geoff Barton this morning, Damian Hinds said he understood why funding was a major issue for headteachers.

But heads reacted angrily when Barton attempted to move the discussion on to issues about accountability before Hinds had made any specific pledges relating to funding, shouting out and demanding that the conversation take place “now”.

“I understand why that’s people’s number one issue and I understand why for everyone in this room the funding in our schools and our colleges is such an important topic,” said Hinds.

“Of course, it is vital that our education system is properly resourced so you can all do the things that you came into this to do.

“Funding is tight, I don’t deny that at all, and I know there have been particular cost pressures as well over the last couple of years.”

One of these cost pressures, Hinds said, was the result of staff turnover, something he hopes to tackle through his newly-announced recruitment and retention strategy.

“When you’re having to replace members of staff who have left, that incurs recruitment costs as well as the general upheaval that comes with that for the school or college.”

Although some heads shouted at the panel during the funding discussion, Barton received applause when he admonished those ASCL members who heckled.

“Can I just say that if the story today becomes about headteachers shouting things out and deputies and other people doing it then we lose the respect of parents.

“We’ve had an opportunity to sit here and talk about things. We know there is no magic wand to find funding, and we know the Department for Education isn’t going to find it. If you think that ASCL hasn’t been arguing about funding, we’ve constantly argued about it. We are not going to sort [that] out on a stage in Birmingham today.

“I’m sorry to be so patronising about it, but I was hoping that wouldn’t happen, because we now know what’s going to be the story today.”

During his speech to the conference earlier in the morning, Hinds pledged a “strategy” to tackle issues with recruitment and retention, which will focus on workload.