The majority of academy trust leaders are worried that growth could have a negative effect on schools in their trust – but financial pressures mean many are trying to expand anyway, new research reveals.

Findings released by The Key, in partnership with the Forum Strategy, show that only 12 per cent of leaders are “not at all concerned” about their financial viability over the next three years.

But the research reveals that most trust leaders have concerns about expanding. Fifty one per cent said that growth could have a negative effect on existing schools in the trust and their ability to support them.

Despite this, 54 per cent said they are currently trying to grow their trust in order to reach economies of scale, with 25 per cent actively looking for new schools to acquire, 24 per cent in the process of acquiring schools and five per cent planning to merge with another trust.

Nicola West Jones, head of market research at The Key, said: “Time after time, we heard from leaders who were striving to build their trust into something incredible for the benefit of their students, staff and communities.

“That concerns and cautions exist would be fine if trusts felt no pressure to grow, or only grew in absolutely ideal circumstances.

“But these worries become real issues because lots of trusts do see growth as a necessity for reaching economies of scale. The government’s new trust capacity fund is a clear step in the direction of encouraging growth, too.”

The government was warned against establishing “monopolies” of mega-MATS after Schools Week revealed earlier this year almost 200 trusts had been given approval to merge.

While mergers were seen as a way to speed up growth, 77 per cent of leaders said they are not considering such moves, citing a desire to hold on to their own ethos, wanting to grow organically or a potential loss of control.

Fifty three per cent also said they are concerned about spreading out their trust’s area of operation too far geographically.

When asked to identify their top priorities over the next year, 53 per cent listed improving their budget/ raising income in their top three, while 39 per cent said they will be adding schools or merging with another trust. 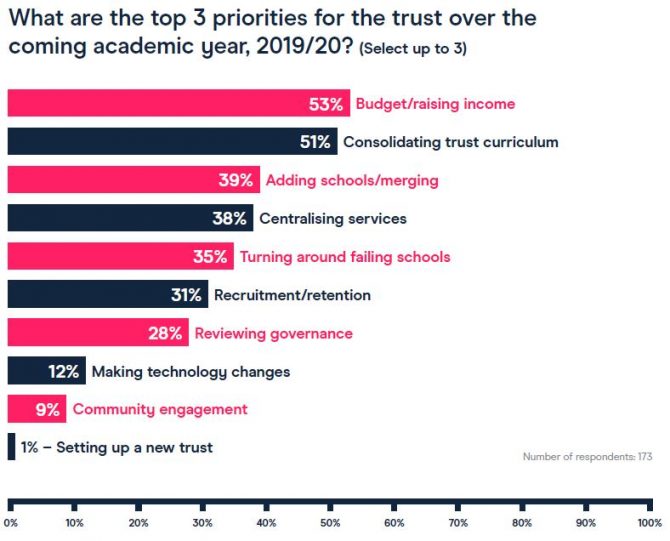 In July, the government announced the creation of a £17 million new trust capacity fund – the latest initiative to boost academy trust growth. The government has handed out £126 million in sponsor capacity funding since 2013.

But this latest research indicates that trust leaders are facing a number of hurdles in achieving the growth they desire, with 39 per cent saying they are finding it either “difficult” or “very difficult” to attract new schools. Just 11 per cent of respondents said they found the process either “easy” or “very easy”.

However some trusts are growing quickly. Schools Week revealed last year that “supersized” academy trusts were on the rise.