Take-up of French and German languages has slumped, fewer schools are teaching languages at an early age, and Brexit has been blamed for schools dropping out of international projects.

There has been a 19 per cent reduction in the number of language GCSE entries in the last five years. French and German were worst-hit, with entries to both dropping by over 30 per cent since 2014.

However, there has been a six per cent increase in entries in other languages, which account for around a tenth of all language entries. The growth was led by Arabic, Chinese, modern Hebrew, Portuguese, Italian and Polish.

At A-level, entries in French and German have also been falling – but provisional figures for this year show French “rallying” with a four per cent increase, and Spanish up 10 per cent. 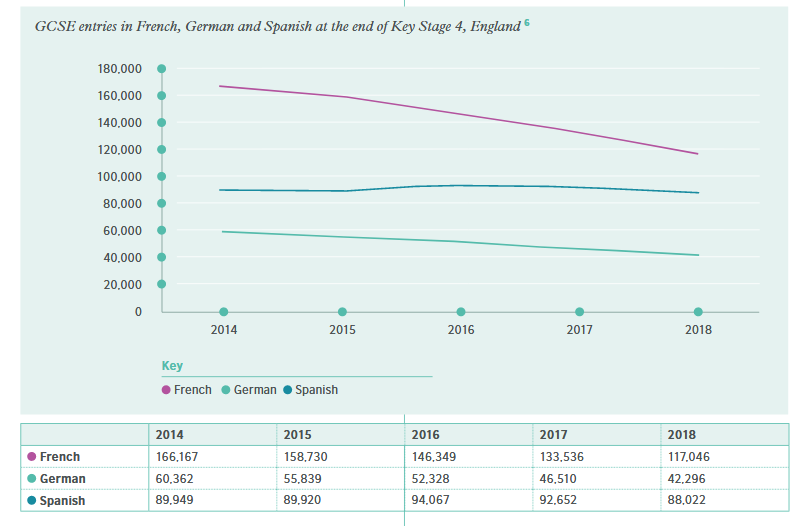 The report found just a third of primary schools taught a language at key stage 1, the lowest proportion since the first language trends survey in 2015 (when 44 per cent reported doing so).

Around four in five schools said they allocated a set time per week for language learning. But a third of schools said that, in practice, pupils don’t always receive this allotted time.

Schools with lower attainment at key stage 2 are statistically less likely to set aside specific time for language learning each week. Just over 10 per cent of schools in the highest quintile for the proportion of free school meal pupils allocated under 30 minutes to languages in year 5, compared with just three per cent of those in the lowest quintile.

There’s no such pattern in years 3 and 4.

Ninety-one per cent of state secondary schools now offer French at key stage 3, down from 94 per cent in 2015. German has seen a drop too, from 48 per cent in 2015 to 40 per cent this year. Independent schools have also seen drops in these subjects.

3. Pupils more likely to miss out on languages in sponsored academies

A third of schools had groups of year 9 pupils who were not studying a language. The report said this is the result of schools allowing pupils to choose their GCSE options in year 8.

However, that figure is actually a slight decrease from 2018, when 34.5 per cent of schools had pupils whose “language education has already effectively been terminated”.

Schools with year 9 pupils who don’t study a language at all are more likely to have a high free school meals rate, be in the north of England and be a sponsored academy.

4. International links are waning, and Brexit is causing problems

The number of primary schools involved in international projects has “dropped significantly”, the report found.

One of the respondents said this was a result of less funding and such work not being “celebrated” in Ofsted inspections or outcomes.

Nearly half of state schools also said the implications of Brexit are a major challenge to providing high-quality language teaching.

These schools were more likely to be local authority-maintained and in coastal areas.

Respondents to the survey reported Brexit has “cast a pall over languages” and were concerned about its impact on the future recruitment of language teachers and student and parent attitudes.

5. Some schools are still miles off the government’s 90 per cent EBacc target

More than a quarter of surveyed schools had 75 per cent of more year 10 pupils studying a language GCSE. That rises in London – to more than half of schools.

However, in a fifth of the surveyed secondaries less than a quarter of year 10s took a language. It suggests the government is way off meeting its target of having 90 per cent of pupils study the EBacc subjects (which include a language) by 2025.

It also looks like outcomes for pupils are plateauing, too.

The report states that since languages were introduced as statutory at key stage 2 in September 2014, it’s expected schools would report year-on-year improvements in language learning outcomes.

But just over a third of primary schools (37 per cent) said their outcomes for year 6 cohorts were improving, while 44 per cent believe they are the same.

At secondary, just 13 per cent think their current year 7 has received better preparation for language learning in key stage 2 than other cohorts. 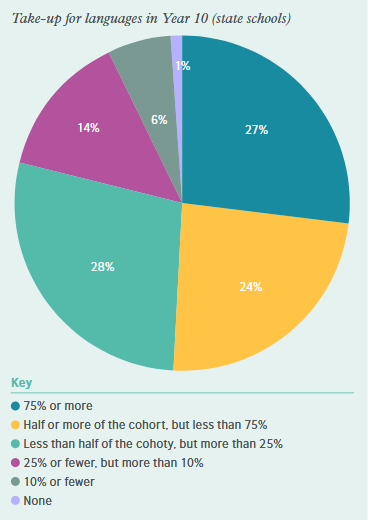 Nearly three-quarters of state schools were concerned about the “nature and content” of MFL exams.

The way exams are marked and graded was also listed as a concern by 59 per cent of state school respondents. While this won’t come as a surprise, it’s another reminder schools have big issues with the reformed MFL GCSEs.

Despite the “widespread concern”, exams regulator Ofqual has previously said there’s no “compelling case” to relax grade boundaries in MFL after an investigation into whether they were marked too harshly.